Matter of fact, once the cavalry arrives to restrain Jesus again, they somehow end up listening to what he has to say. They’re totally onboard with sending the town’s ruling council and the majority of their top-tier fighters with this stranger, as well, even after hearing he’d taken full stock of their supplies and people before essentially turning himself in to Rick. They were more suspicious of Morgan, the man who may be the sole reason Rick saw more than a week outside the hospital after his coma. Yes, Morgan snapped his Slim Jim after his son passed, but he is fully not crazy now and Carol still watches the man like he’s about the club them all to death and make sachets from their skin.

With no real concern whatsoever, Rick, Michonne, Glenn, Maggie, Daryl, Abe, and Jesus climb into an RV—there’s always one which just happens to be nearby—and take off toward an undisclosed location with only their vague threats to keep Jesus from driving them into a trap.

Which exactly what it looks like not long after we rejoin the gang on the road. A car, one Jesus swears belongs to his people, crashed on the roadside moments before they drove past. Now, not only are the fighters separated from the group, they’re being put directly in harm’s way for people who may still turn around and put bullets in their brain pans. There’s an urgent rescue. One of the guys, Dr. Carson, thanks Maggie and Glenn by being probably the only OB left alive in the state and offering to care for their baby. How’s that for luck? 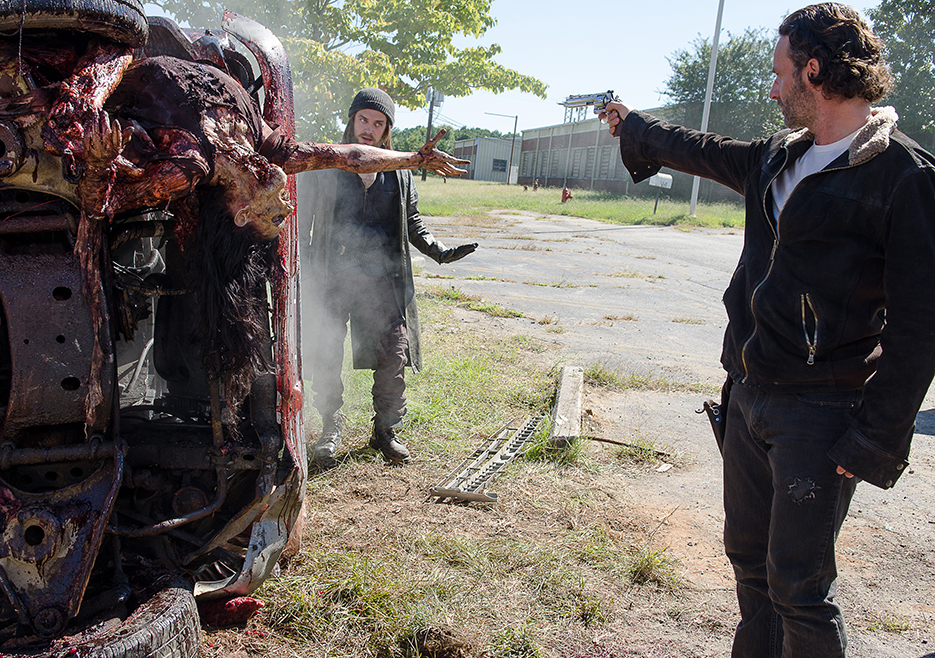 During the entire episode, Jesus is essentially Google—feeding Rick and Maggie exactly what they need to manipulate Gregory, Hilltop’s chicken-livered and misogynistic leader. It’s all too easy, this plot. Somehow we end up at the right place at the right time for these unfortunate people to demonstrate the kind of antics keeping Negan top dog in the county. But with all the bad Negan has done—namely, his men murdering a sixteen year old boy upon The Saviors’ first meeting with Hilltop—Jesus seems not concerned at all about being in the room with two men confessing to blowing up quite a few of the boogeyman’s goons. If that were me, I’d wash my hands of Alexandria, not matter how badly we needed another trading post.

Hilltop itself is designed to resemble a walled medieval estate during wartime, with all the folk from the farms and homes under care of the lord encamped within the walls. It’s so blatant, Gregory turning out to be a world class jerk doesn’t surprise me in the least. It’s even less surprising that one of his own men would then stab him, hoping Gregory’s death would secure the release of a man Negan took captive. Why did he take this guy and kill another Hilltop citizen? Gregory sent his people to deliver their usual payoff knowing it wouldn’t be enough. It’s never enough. Negan will demand more and more. Though Gregory survives, this hasn’t done a thing to teach him to grow a pair and take on the man running their lives from afar.

In comes Rick and his band of killers.

Seriously? This is where the story goes? They veer from attempting to set up a functioning ecosystem in Alexandria to hired mercenaries who’ll just kill and take what they want. These are the people Rick wants to kill, usually. But when it suits them, murder is on the table. They wouldn’t need to kill Negan so soon if they’d stopped to do the boring things like clear fields. But they need food now. Hilltop has a functioning system in place which produces enough food to send half to Negan without forcing strict rationing in Hilltop. If Negan doesn’t need that food being dead and all, Alexandria will take it. Now. Half of whatever is on-hand is cheaper than the cumulative price to keep Negan at bay via bribes.

But again, this is all too easy to follow to the conclusions the writers want. They’re trying to make fans guess who’s going to die. Is it Glenn? Negan and Glenn’s comic book story is well known, spread by every reviewer trying to make the show into something it’ll never be—an accurate reflection of the comics. They drive more nails into Glenn’s coffin during this episode, finally giving us a glimpse at his and Maggie’s child in an ultrasound. Every happy character dies on this show. It’s no surprise. Abraham seems a tad happy himself after some soul searching and a near-death experience, but he’s mostly in the story now to fire large weapons and make us question Glenn’s fate going into the season’s end. Some say golden boy Dixon will bite the big one. It makes sense, seeing as he did blow up Negan’s people.

It’s all so boring, this weird dead pool going on in the fandom. I never watched the show to see who would die. I kept watching because the characters made rational decisions in an interesting setting and the story pace never lagged so much, I wanted to wander off for a snack ten minutes into an episode. They’ve killed the Negan story line before it begins.