I’m not sure one can write spoilers for an episode so utterly predictable, the only parts which surprised me were the few glistening moments where we saw some actual character development. Nevertheless, that’s why we’re here, to pick apart the show, find more tidbits to feed our need for decent entertainment.  So many fans lay their hope for TWD’s future on the Negan storyline. This is it, the chance for the show to realign with the chaos within the comics. Producers have promised fans they’d get what they want from this whole thing. If a nap was their ultimate goal, they succeeded.

(Watch out! Spoilers lurk below!)

Maybe that’s not entirely fair. There are stellar moments in the fight at the end which made the skin on my neck tense. But, honestly, maybe five minutes of quality writing are buried deep in cliché dialog, phoned-in emotions, and Rick being Rick. Some of my favorite scenes are with Glenn and Heath. 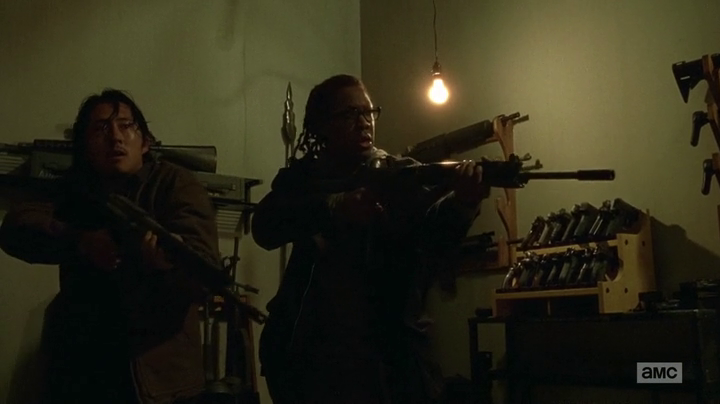 The original survivor, Glenn, is not keen to kill again. Heath hyped himself up the moment he heard Rick’s plan at the town hall meeting—exactly the reaction their leader wanted from his little pep talk spouting how they need to “get them before they get us.” It became Glenn’s job to talk sense into the young man.  A position Glenn found himself in a lot during season one. Remember the car with the alarm? Yeah, a great impulse idea, but the aftermath cost many lives and their camp. Heath may think it’s the right thing to go into the raid ready to kill, but how would he feel the day after? How about a week down the road when he remembers the way his knife wouldn’t quite go into the skull right? Killing haunts the survivors who’ve been in the wild for long. Glenn’s fault is he wants to spare Heath, retain the young man’s innocence. When it comes time for them to do some of the most intimate killing scenes on the show—attacking Saviors in their bed and dispatching them with a single knife thrust trough the eye socket—Glenn takes the kill guilt upon himself. Being no coward, Heath still gets a few kills to notch on his belt when he and Glenn hold the line to guard the enemy’s armory. But even though his kills weren’t up close and personal, Heath still flees in the morning, more than ready to go on the two-week trip with Tara for supplies. 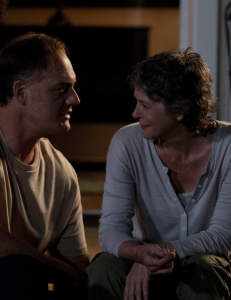 Where Glenn grows as a character, Carol is undermined at every turn. On top of her unfounded refusal to trust Morgan—up until they created a reason with him holding the Wolf in the cell—they’re now making her the “bad boy” to ease fans into the reality of Negan’s notorious potty mouth, plus reintroducing tobacco products to the show since Daryl’s smoking has petered off. In stark contrast, she’s been acting like the town’s mother, something Tobin calls her out on during a random romantic encounter after sunset. During a day full of doubts, concerns, and knowing death is near again, Carol gathered friggen acorns to make cookies for everyone. Even Sam. It’s been a while since the show side-swiped me with emotions, but I teared up seeing the lone cookie on his grave. Then I got angry—Sam gets more care after his death than before.

Carol’s mom-ness spreads to Maggie’s welfare after the pregnant woman insists she go on the raid. Glenn gave up that fight before it started. Rick is told rather bluntly what Carol thinks, but she never spells out why Maggie shouldn’t be there. It’s more of the same when Carol and Maggie, who were left to guard the perimeter and RV, hear the alarm triggered by a Savior—Sasha kills him, but not in time—and rush to help. Carol stops in her tracks, refusing to let Maggie move. Her hesitation because Maggie will also become a mother is why the episode ended in such a convenient manner. Carol, of all the fighters they have, should understand why Maggie is at the raid. Maggie laid out the terms for Gregory. She dug this hole for Alexandria, now either she helps fill it in or it becomes their graves. In Maggie’s shoes, would Carol honestly sit at home baking? Not this Carol. Even weeks out from her last kill, this Carol wouldn’t let others take full responsibility for something she set in motion.

Short note: Abraham is an a-hole. Rosita should shoot him in the foot.

The raid itself is pretty straight-forward. The group sends Eddy to offer Gregory’s head to the Saviors. Don’t fret, it’s a walker they disguised to resemble the injured Hilltop leader. The guards take too long to examine the head, not in terms of creating tension, but it just felt like, “Oh, they’re going to be d-bags and make Eddy sweat.” After one guard fetches the kidnapped Hilltop member, the gang dispatches both guards without a sound. The Hilltop people retreat to a standby vehicle with Jesus, Tara, and Gabriel. Rick, Michonne, Abraham, Sasha, Glenn, Heath, Rosita, and Daryl enter the compound. They pair up, searching each room they pass. If the room is occupied, they kill the Savior inside. If the door is locked, they pry it open. Why the random searching? They know nothing about they layout, only a vague idea of where the armory is and the location for the pantry. The locked rooms turn up a supply closet, a marijuana growing operation, and the armory Glenn and Heath defended. 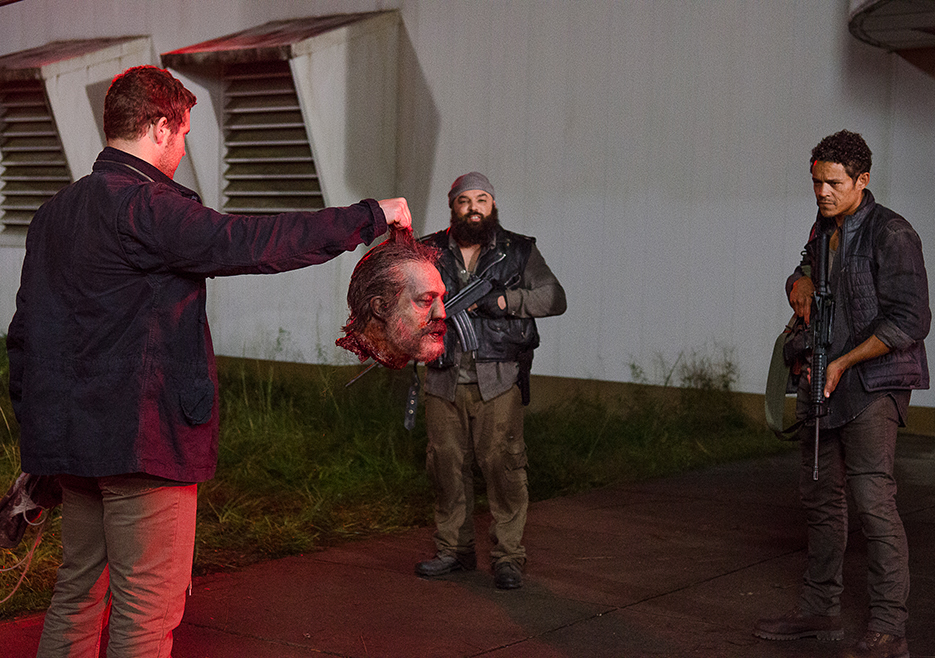 Things run smoothly until Sasha and Abraham are caught breaking into a room. After the alarm is pulled, the gang mows through the stragglers—who aren’t unarmed, but have aim like Stormtroopers. Jesus, Tara, and Gabriel join the fight. Jesus saves Glenn and Heath from the lone survivor outside the armory. The other Hilltop men take the car and head toward home. Gabriel shows his backbone, praying for a Savior before putting a bullet in his head.

At sunrise, everyone from Alexandria and Hilltop are still alive. Heath scouts the Saviors’ cars and picks one to take on the trip. He and Tara roll out without much fanfare. Michonne wants to know which dead guy is Negan. None of them, duh? Plus, not everyone died. One guy on a motorcycle makes a run for it. He’s shot down. Rick and company surround him, making demands. A woman’s voice over the radio makes her own demands. When they fail to comply, she informs them that her people have Maggie and Carol.

Of course they do. I knew the second Maggie and Carol were left on the outskirts alone that they’d become a bargaining chip. It’s easier to kidnap the women, despite Carol’s ferocity, than the men on the mission—except maybe Heath. This is how they’ll likely force the face-to-face with Negan. A kidnapping. It’s so uninspired.