Ruby also has a weird connection to the deadites, one which is teased yet again after Ruby and Amanda arrive at Brujo’s farm, only to find the funeral pyre burning as well as the idols. The remaining idols inside the house react to Ruby with similar curses to when they faced Eligos. Hell, even Brujo has something to say when he jumps from the pyre as a deadite to attack Ruby. How is she a double crosser? Did Ruby make a pact with the deadites? Is she the real reason why the book was at the cabin? We may not find out. Ruby and DeadBrujo fell into the fire. Amanda didn’t bother sticking around to see if her new friend survived. The second Amanda realized Ash’s POS rustbucket backfired on a nearby road, she steals Ruby’s car—minus Ash’s hand, which wandered off—and follows. 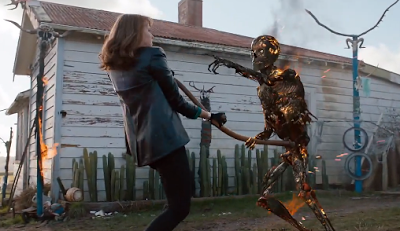 Unconcerned with potential pursuit, the gang stops for a bite. Ash attempts to dump his baggage early, telling Pablo and Kelly they can’t go to the cabin. They call BS, no amount of danger will keep them from seeing this through now they’ve been dragged in. Kelly lost her family; and Pablo has no one left aside from his awkward feelings about Kelly and a half-hearted friendship with Ash—neither have anything left to lose. Pablo proves his mettle by telling Ash, “If I were a deadite, it’d be an honor for you to cut my head off.”

It’s an honor they all may experience soon if Ash doesn’t stop finding danger in the most mundane spots. 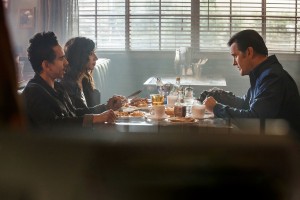 We already know Ash isn’t the most stellar guy. After he offers to pay for the gang’s food, he tries to back out. Pablo and Kelly call him on it and he moves on to hitting on the waitress, promising her the best sex of her life to work off the bill. He’s not even concerned when Nancy points out her menacing husband working in the kitchen. Ash just wanders to the bathroom to await his next easy conquest.

The woman who walks in isn’t the woman he wants to see. Amanda and Ash fight again, with her still assuming he has a direct hand in the deadites and the deaths they cause, not that he’s a doorknob with his libido doing the thinking ninety percent of the time. It isn’t until the other State Police officer she calls in is killed and transformed into a deadite that Amanda suddenly realizes, nothing the doorknob does actually makes these things; the monsters just show up, kill people, and make a mess. The man she wants to hold accountable is actually the only one with the skill to kill them.

After Amanda sees Team Badass in action, she wants in. Of course she wants into their oh-so exclusive club. Who wouldn’t? Oh, say, anyone who wants to live to see old age? Ash doesn’t have a good track record for keeping companions alive.

There may be a snag in the plan to reach the cabin. At the restaurant, Ash runs into an old pal, Lem. Lem has joined forces with the local militia. When the deadites hit the fan, Lem bolted into the forest behind the restaurant. He’s put in a call for backup. Hope there’s extra bunks at the cabin, looks like the gang will have company. The other snag? Kelly may not be ready to say goodbye to revenge killing. After everything, she lives for the confrontation with evil. During the main fight for this episode, she uses a meat slicer to carve away DeadNancy’s face. She’s seriously into the kill. If they bury the Necronomicon, all her anger will have nowhere to go.

I don’t think we’ve seen the end of Kelly’s possession by evil. Eligos may be gone, but the weakness her revenge creates will make her an ideal target to become the Big Bad come the season’s end.