Is there something in Alexandria’s water? Not only are main characters losing their marbles—Maggie, Carol—but there’s another rash of B characters doing half thought out things and ending up taking tea with Death. Once again, we’re stuck waiting for the main plot to reach something resembling a conclusion while stalled with side stories writing off characters who make the show messy. Why else would they put an arrow through Denise’s eye? She’s the other half of the show’s only currently visible homosexual couple. Yes, we have Aaron and his husband, but their shock value wore off, so they introduced the lesbians. It’s like that thing they keep doing where there’s only Michonne, Glenn, and one other person of color in the main crew. Never mind them stumbling across minorities known to live in the areas they’ve visited and lived. Having visible LGBT couples is morally compromising.  Bringing in Negan, Captain Inappropriate from everything we’ve been promised, means pushing boundaries which are already pretty stretched by their half-handed attempt to embrace diversity. This is where the show loses this game of chicken with the fans. They push, push, push, and when fans don’t flinch or react the way they want, they change course and drop the idea in a convenient way. Commit to something other than fanservice. We want a coherent story, not to catch them sweeping things under the rug to make room for something I’m starting to lose faith in. 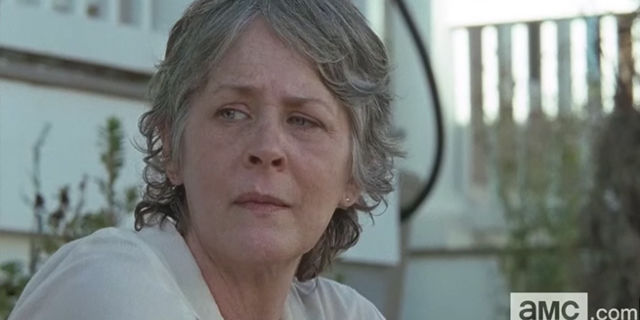 We start with another poorly handled time jump, this interval expressed as a few Groundhog Day like montages featuring the town guards changing shifts, Gabriel on patrol in the fence, and Carol smoking while obsessing over the crucifix from the last episode. Morgan finishes the jail cell, telling Rick it’ll give them more options next time. He’s not wrong. This is the only time we see Rick, by the way.

After the opening credits, it’s pretty much just characters which haven’t had much screen time or character growth. Which makes one wonder why anyone would put the penultimate episode for the season in the hands of characters no one cares about anymore. “But, Daryl!” He hasn’t had a meaningful part in the plot other than playing Terminator since the season began. His part in this episode is basically to escort Denise to her poor life choices. Rosita is in the same boat, her story only complicated by falling in bed with Spencer and planning dinner with him. Denise leads Daryl and Rosita to a fully-stocked apothecary. They score the loot, but Denise plays snoop, scaring herself after finding a walker and what may have been a drowned child. No one is hurt. All they have to do is walk back to the truck and drive home. Then Denise continues to self-sabotage in the guise of self-help, breaking into a walker-protected car to raid an ice chest for soda. Daryl is pissed. Rosita is dumbstruck. Denise suddenly starts yelling a bunch of stuff which really doesn’t make sense, but the gist is she doesn’t feel brave and stupidly almost getting eaten to steal soda means she’s brave enough to openly love Tara. She only took Daryl and Rosita to encourage them and feel safe. 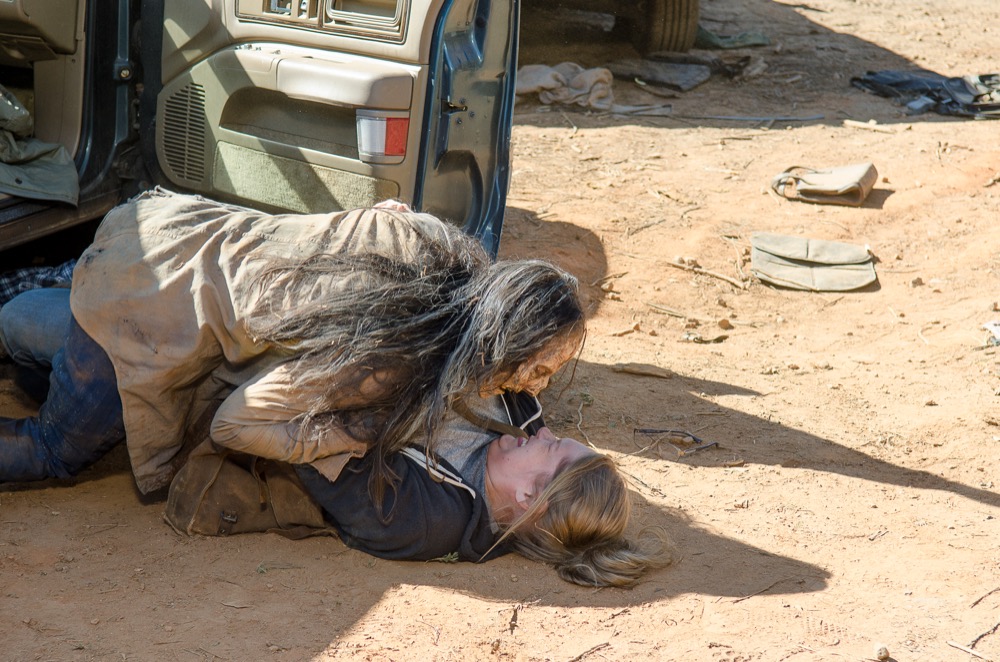 Safe until Dwight—the guy Daryl failed to kill when he stole his motorcycle—shoots her in the eye.

While the trio were shopping, Abraham took Eugene to a warehouse where the Brainiac wants to produce ammunition. It’s a great plan. Then Eugene gets a bug up his backside about his bravery as well, calling dibs on a walker he so cannot kill. He and Abraham fight after the big man steps in to help. It ends with Abraham just leaves his buddy after Eugene fires him from protection duty. This is all so Eugene can get captured by Dwight and his many companions and used as leverage against Daryl and Rosita. Abraham hangs around, somehow accidentally finds them, and helps send the bad guys back wherever they came from. In the process, Eugene is shot. They carry him back home to patch the wound—just a graze. 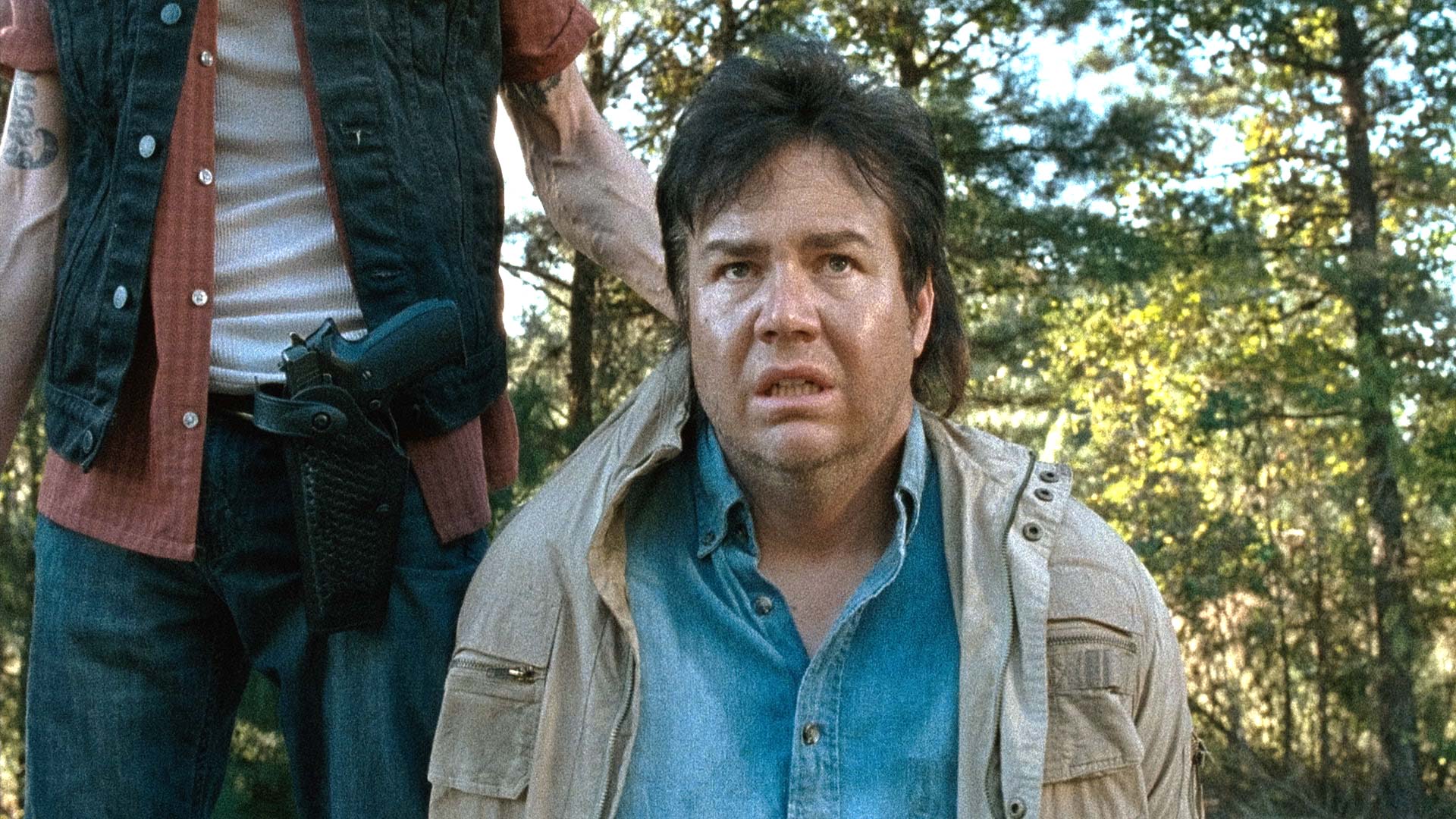 After Daryl and Carol bury Denise, Carol leaves a note for Tobin stating she should’ve never come back and she’s leaving again. For good. Don’t try to find her. Because, when they can’t figure out how to salvage a character, it’s easier to have them just walk off into the sunset. I honestly don’t think she’s gone. Carol will either end up dead at Negan’s feet in the finale, or forced to kill and save them all. They can’t spend the entire season messing with her only to have her leave a Dear John letter like a coward. Then again, character integrity seems to be the hardest continuity issue for this show to maintain.