Those adventures brought up an arm-long question list from fans. This return to the source should’ve answered a few questions, right? It really only answered one: What kind of dagger is it Ruby keeps so well hidden? Amanda accidentally finds the answer in a journal inside the cabin; the dagger can melt the binding on the Necronomicon. But as far as Ruby’s true identity, her connection to evil, or anything truly in depth about what they’re facing? Nope. Nada. Zilch. We get heavy-handed callbacks to Evil Dead, some poorly executed, and a death we all saw coming since episode 103. I said in my last review that the formula was killing the fun, well . . . . It’s dead, Jim. 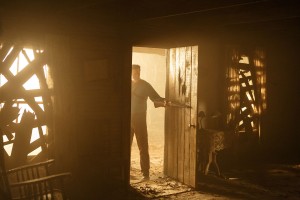 The glorious parallels to the film franchise were few and far between, but at least they started it off right. We catch up with Ash walking in the woods, communing with undead birds. Then, the cabin appears. The porch swing bangs against the wall—thump, thump, thump, thump, stop. My shriveled heart actually beat when Ash hit the porch. But from there on out, each reference fizzles or only manages to illicit a, “Huh, I remember that.” They even brought in the dreaded ex-girlfriend scenario. Now, it may be nostalgia coloring my memory, but was Linda always so insufferably obnoxious? I remember she did whine a little, but the actress they brought in to be Linda’s head took whine to professional levels. There is no authenticity in the performance. She phoned in what she parroted, poorly, from the source material. There’s a scene where evil flings things at Ash and steals his technohand, marred by Linda’s incessant whining and fellatio jokes. We get a BadAsh in this episode, for heaven’s sake. That alone should make plotting through Pablo and Kelly’s B-story of nothingness worth it. 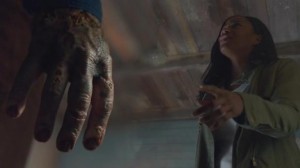 BadAsh gets lumped in with the Ashmanda plot. Of course. We see what may be character growth from Ash and it’s his psycho half manipulating the heck out of Amanda by hinting at a happy future between them. How did BadAsh come about? Well when a severed hand and a demon love each other . . . . Basically, the hand grew an Ash. BadAsh has Amanda fooled up until she realizes he’s got a rather funky appendage. They fight. She loses. Of course she does. The boss fight in this whole thing has to be Ash against a deadite woman. Because if fans haven’t figured it out by now, his worst enemies are himself and love. Even in Army of Darkness Ash’s greatest enemy isn’t the skeleton army at the gates, but the possessed woman he once fell for out of the blue and BadAsh. Literally everyone else is in the movie to fight or die in the background; they don’t matter. So why even attempt to get Pablo and Kelly into the episode if they’re doomed to similar fate? Why not make the episode focus on the fights with Linda and Ash, Amanda and BadAsh, and finally Ash vs BadAsh? They planned to leave the final fight on a cliffhanger, anyway. Why not put more focus on what’s obviously the sole goal in the episode?

There’s two episodes left. I’m eagerly awaiting something on this show surprising me.