Doggy-paddle faster, there are spoilers below.

New season, new outlook on how the show will progress. It’s something I do with every show hitting its sophomore season; drop expectations and watch like it’s a whole new beast. Only this beast is no monster. The mistakes are so similar to season one, I couldn’t maintain optimism the entire episode. As usual with Walking Dead properties right now, they wrote to do a couple cool things in the episode instead of writing for plot integrity or to repair the damage they did to the characters’ identities, or lack of identity. 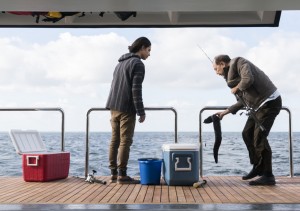 Everyone is still flat stereotypes. Madison spends the episode micromanaging, ignoring Chris, and contradicting herself. Travis is a tool, unable to cope with his son because Big Tragic Death. Chris spends half the episode cuddling Liza’s corpse, and no one thinks this is concerning behavior. Ofelia is a ghost, seen but only heard once or twice. Daniel is the Wise Old Man collecting information. Nick is useless. Alicia gets the role of “naïve young girl who lures enemies to their location.” Because how else would they bring in human enemies without Alicia doing something completely against character? Anyone raised in the digital age knows to prioritize personal information. Alicia knows humans are dangerous. Military men, who are supposed to help civilians, threatened to rape her. There was ample footage of riots from when the outbreak started. The only reason Alicia talks to Jack is to introduce human threats. What about Strand? He’s still an A-class jerk lording it over everyone because he has the means to control them—without his boat, they’re dead. I could’ve told you what each character would do without watching the premiere. 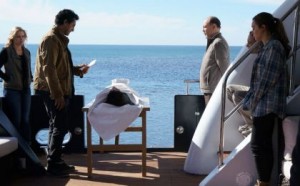 The plot is pretty simple. The gang splits, some prepping the boat, the rest grabbing the gear. And Liza. Chris won’t leave Liza, even after the infected find them on the beach. The fighting hasn’t gotten any better. They still film them like a Blair Witch outtake. Instead of making it exciting, the fights are yawn-worthy. These people couldn’t rip wet paper, but they can narrowly escape being wrestled to the ground and eaten. Everyone makes it on a dinghy, Travis with his burden coming in at a laughable pace to give a dead guy time to shamble into the surf and set up a cool kill. But to be honest, I’ve seen so many things killed by boat propellers, their whole clunky setup isn’t worth it punchline. I would’ve been more impressed if they gave into the urge to use the gag altogether as long as the gang are on water. To top it off, Madison—who just bludgeoned several infected—gets queasy about the kill. She wasn’t queasy before, why now? On the big boat, everyone goes to their corners or piddles around the yacht. They argue about rescuing refugees, Strand making the call to keep going. Alicia does the dumb thing. They have a funeral at sea for Liza, which Chris has a fit during and after. When Chris cools down, he opts to skip eating the mystery fish Daniel caught and goes for a swim. Nick joins him. Somehow both missed the smoldering wreck in the water. 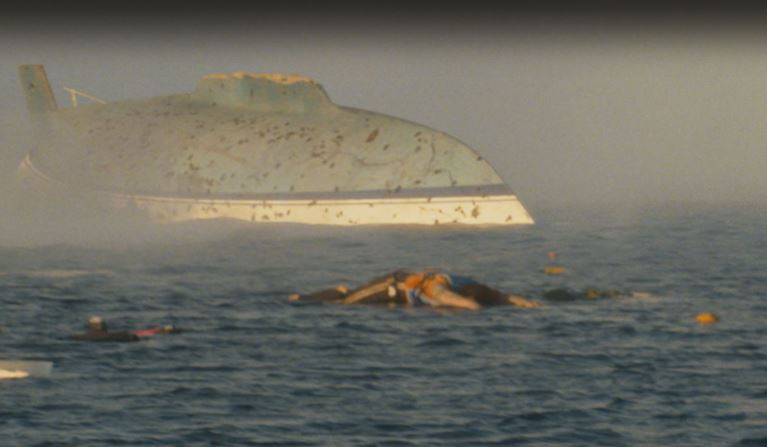 There’s so much fake fog, it’s ridiculous and looks like a set on a pond. Nick hears someone in the wreck and goes to play savior. Did I mention the infected in the water? Well, they’re there, too. Inside the boat, Nick does maybe five seconds of searching for the survivor, thirty seconds struggling with a dead woman, and grabs the travel log for the wrecked boat. Nick only lives because Travis hollers. Seriously. The dead woman just stopped fighting because of a noise. What? Is it a smell thing? Nick was wet, so only his movements and noise drew the infected? There are so many better ways to show this than for the infected to just stop when a foot from food. No one dies. There’s human enemies on the way. They could be Alicia’s Jack and company, or a separate band of pirates. They’ll get all grr with everyone, Madison will play tough woman, Travis will try, and eventually Strand will bully their way through since he is the only one with answers, it seems.

Boy I hope they get it together soon. If they pull out Monopoly on the yacht, I’m jumping in the infected-laden ocean.