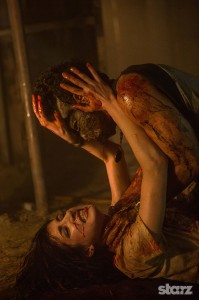 There wasn’t much left at stake personally for Ash at the end. I really wanted him to feel more in this episode, and while he did show huge growth adding his team into negotiations with Ruby at the episode’s end, it’s sugar coating on Styrofoam.

We say goodbye, again, to Amanda. Her deadite counterpart crashes the party inside the cabin after Pablo has that thing latch onto his face. True to form, she is the one to deliver the infamous, “I’m going to swallow your soul,” line during her final fight with Ash. Before DeadAmanda is cut in half, Ruby takes Pablo and the Necronomicon into the basement. Things get freakier from there.

Doomed to his own ill-advised plans, Ash goes into the cellar alone to save Pablo. Okay, Kelly could have probably talked him into a group effort, but the cabin shook Ash into the basement where Ruby gave him a vision of the night he read from the book again to unleash more evil and get laid. This is where it gets a bit clunky. We’re to believe now that the Dark Ones are down to one Dark One who wishes not to unleash evil, but control it to maintain universal balance. All the vital information about Ruby’s scheme is dumped in this daydream. Then she attempts to make a deal with Ash, one we all realize he’ll probably take at some point just to screw things up even more. It ruins the surprise. 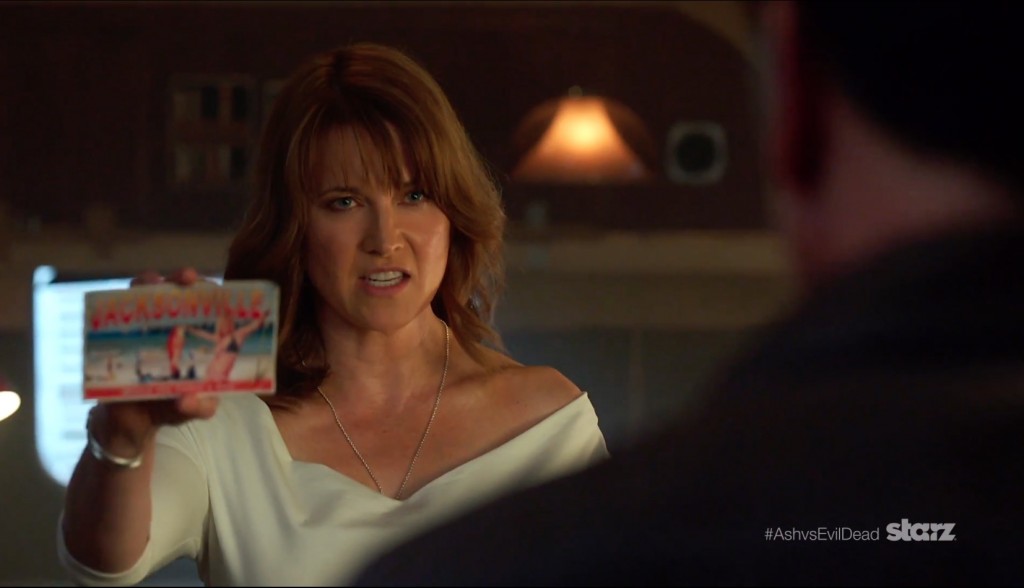 I don’t know why Heather was ever present, other than to give them someone other than tiny demons to kill in this episode. She’s meat. Don’t get attached. She sure isn’t attached to any body part by the time the cabin literally chews her up and spits her out in a gush of blood and chunks. The wave knocks Kelly down, honestly just dirt on a turd sandwich at this point. Kelly has been thrown around, had an eye pop on her and Heather, the guy she likes looks like he’s auditioning for a remake of The Mask, she’s locked out of the cabin, and the savior she’s supposed to rely on isn’t a team player. Eventually, she sets the cabin on fire, injuring it enough for it to unlock the doors. 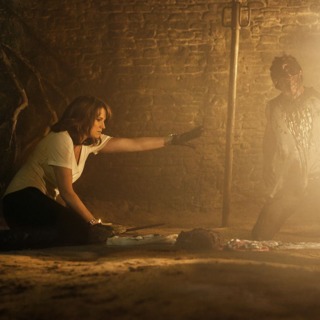 In the basement it’s quite beautiful. I mean, that’s what everyone says when witnessing the miracle of birth, right? Unless it’s Pablo birthing demons by vomiting huge, wriggling, uterus-looking things. The demons which crawl out are played by children. They are evil. Evil children are evil. Why do people insist on tormenting me by adding demonic children to things I enjoy? Ash fights one child demon, the others flee.

Most of this episode is fight scenes. It keeps the awkward story bits from getting too much attention while highlighting an aspect from the films everyone loves—Bruce Campbell getting hit a lot. The final fight sequences all boil down to one thing: Ash has to make a decision. Either he can kill Ruby and wait to see how the chips fall with Pablo’s possession and the unleashed evil, or he can take the deal and trust Ruby to do as she says. He tries to get the best of both worlds, ensuring safe passage for Team Badass and a little money to help them on the way. It’s not as much cash as he wanted, but they have gas money. Yes, Ash just handed the future of mankind to an evil woman for a couple bucks and a trip to Jacksonville, FL.

Ruby totally reneges on the deal, too. There’s sinkholes popping up all over the area as Team Badass trundle off into the sunset. At least we know there’s still evil to fight in season two.