Home
Review for Ash vs Evil Dead 201
By A. Zombie 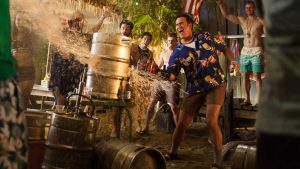 Pablo and Kelly sling beer at a dive bar in Jacksonville, FL while Ash makes himself the life of the party. For one of them, life after the deadite invasion is golden. There’s plenty of hot chicks, alcohol, and his little lizard buddy is there to play wingman. Ash’s happiness is hollow and fleeting, like a chocolate bunny left in an oven. Things are amiss with the dark side. They’re gonna need the bumbling savior once again.

Enter the deadites, and they’ve got a message from the woman in charge, “The truce is over.” Ash’s fighting skills were swapped for keg-cutting and flirting. The fights are slapstick, with Ash struggling to do the heroic moves he’d mastered over years fighting evil. The deadites, primarily a woman he’d flirted with before crap hit the fan, taunt Ash with “Ashy Slashy” rhymes. There’s only one way Ruby knows exactly how to get under his skin—she’s in Elk Grove, his hometown. 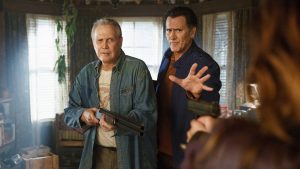 There’s no waffling around, when Ash reaches Elk Grove, he stops by the old homestead. Enter Brock Williams—Ash’s cantankerous, unsupportive father, who greets house guests by firing a warning shot past their ear. There’s no love in his heart for his wayward, murdering son or his sidekick, Pablo, but he really wants a date with Kelly. The offer is shot down before he finishes asking her out.

With nothing more than a city’s name, the gang’s gonna need some help finding Ruby. Too bad Ash is the town’s local serial killer and they want less than nothing to do with him, or his mission to save mankind. Linda Bates is the sole kind soul at the bar Ash visits looking for information. Her kindness ends where her husband’s hatred begins, though. Sheriff Thomas Emery would gladly tar and feather Ash if given the chance.

Pablo ends up proving his usefulness . . . by having wicked violent hallucinations linking his mind to the Necronomicon again. The hallucinations, and Pablo’s mind, are sharp enough to feed the gang the clues they need to find Ruby. It’s too easy. They’re totally walking into a trap.

It’s actually a trap for the Mother of Darkness. Ruby’s been cornered in Elk Grove’s crematorium since the freak deadite storm in Florida. Her babies, those freaky little bastards, matured into malicious demonspawn hellbent on using the Necronomicon to their own devices—personal theory, they want to summon Great Daddy Evil and get the family reunion really rolling. The only way Ruby knows to contain the new evil threat is with Ash’s help. There’s a boatload of character development for Ruby in her brief scenes. Necessary development since it’s well known the character didn’t have much on paper when Lawless took on the role for season one. As much as I enjoy watching Ash fumble through his savior complex, I want to see what Lawless can do with Ruby. There’s great potential for her to go good or evil, and that’s the real attention-grabber for season two. When it comes time to decide, will Ruby back Ash or will she fall to old ways and reign over evil once her darling problem children are disposed of?

The adult demonspawn are freaky. There’s awesome physical movement from the one who attacks Pablo, in particular. It’s easy to rely on scary makeup to push the point, but changing the way the creature moves to make it truly inhuman makes a simplistic design much more effective. They also morph into shadow creatures and take on human form, adding infinite opportunity to mix up fight scenes if these guys are going to stick around as the primary kill-target this season.

With the gang together again, they’re off to stop Ruby’s great mistake. So, what are the odds Ash annoys her so much she tries to kill him before they’ve been on the road an hour?