Out with the old baddies and in with the new. The Necronomicon has returned home to Hell after an extended vacation topside to chill with his Deadite homies. They’re probably lounging around a lava pit telling tales of possession and taking bets on how long Ash will last against Baal. One demon lord doesn’t seem that imposing in a franchise where the lead character faced an army of sassy skeletons and survived. Then Baal whipped out his massive powers. 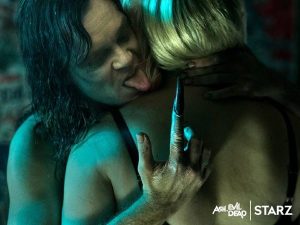 Unlike some shows where the bad guys all have the same M.O., this one strives to venture into new, different lands. While having an episode plot based around “Who’s really the bad guy,” isn’t shining and new in the idea department, turning Baal into a skinwalker leaves a lot of fun to be had in a cliché plot device. It also allows the SFX department to give Baal’s goons a style not easy to forget. I mean, I’d wet myself if a skinless woman fell through my ceiling and ripped a prostitutes’ arm off, let alone forget it happened anytime soon. One failing in Baal’s powers is this seductive bullcrud he pulls on Ruby. She’s a badass, killing evil right and left; then Baal swivels his hips and she literally can’t form sentences? It’s a huge disservice to the female characters on the show to go from an episode where they clean house without any men to back them up, to Ruby practically begging for a little action from the guy who killed two women inside the sheriff’s station without blinking. Using sex to negate Ruby’s strength is a low blow. Ash gets laid all the time and he still gets the evil-slaying job done. Baal has so many other evil things he can do, let’s lay off the whole, “His groin is mesmerizing,” thing. Okay? 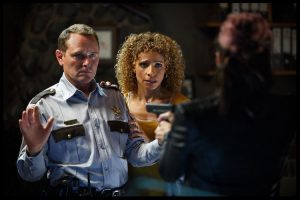 With everyone locked in the sheriff’s station wondering who’s got Baal crawling around in their skinsuit, tensions run higher than Chet’s blood-alcohol level. Sheriff Emery and Ash are at each other’s throats the entire time Linda is at the station. It comes down to Kelly to calm everyone down. By that I mean she grabs the sheriff’s gun and holds everyone hostage—when they’re technically already in a hostage situation. The Inception-like hostage situation happens again elsewhere in the station when Ruby goes to retrieve her dagger. Baal uses a deputy to work his D-Mojo on her, rendering her pretty much useless until the episode’s end when she just happens to help Ash save Linda.

Like having a skin-stealing demon on the loose wasn’t bad enough, Pablo’s got a mean case of what-the-hell-is-that spreading across his stomach. Personal theory, dude’s turning into something akin to the Necronomicon. Why else would he have Sumerian written across his torso? No one signs up for oozing boils and a dead language willingly. Ruby is thrilled about Pablo’s condition. Pablo would rather French kiss a shotgun. But, hey, he should be proud. He’s the key to saving the world . . . after dooming it by tossing the Necronomicon in Hell and freeing Baal.

Looks like more skin-jumping good times aren’t all that’s ahead for the show. Ashy Slashy may just finally win the girl this time around. Sheriff Emery isn’t the man his wife thought after shrieking throughout the fight with his skinless deputy. Linda breaks up with him then and there, totally falling for Ash’s blood-drenched swagger. All of them are out of their minds considering their having a lovers spat over a bisected, skinless corpse.

That’s the joy of this show. It doesn’t really care so long as Ash looks a fool, there’s about twenty gallons of blood used, and someone at home says, “What the heck is going on now?”