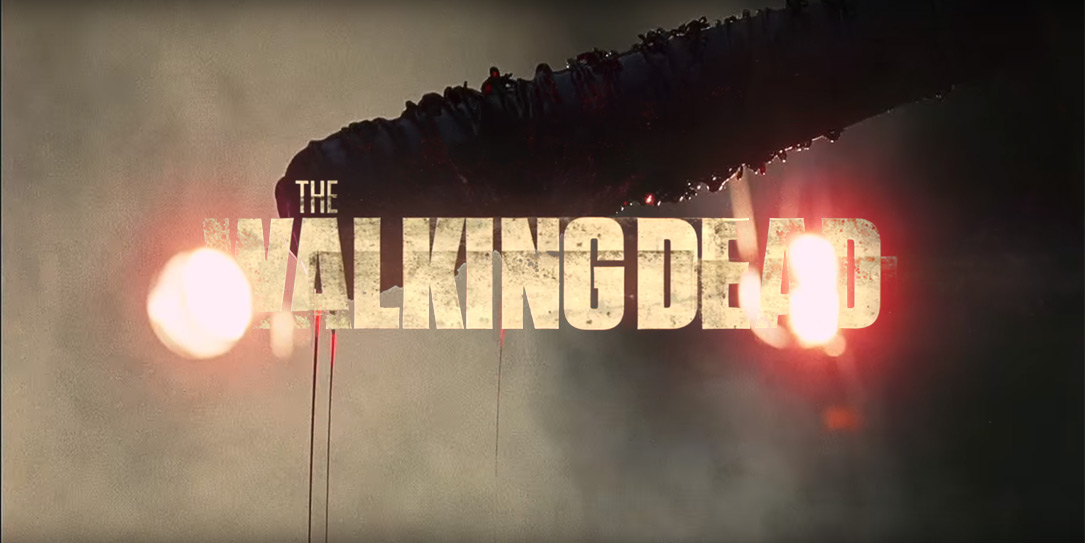 Service
Review for The Walking Dead 704
by R.C. Murphy

Watch out! Episode spoilers below.

To give the old ways a push out the door before we settle into the Alexandria monotony again—though they did take the time to show Rick and Michonne in bed together, first—Negan makes a house call to collect his half of their stuff. The episode is a “90-minute shopping trip,” as several fans put it, with some threats tossed in to make it somewhat bearable. Negan is the snake in Alexandria’s Eden. With Rick by his side, he slithers through taking a mental and physical inventory of his newest acquisition. Interaction with the big man and the many is sparse, Negan preferring to use Rick as his mouthpiece to address the town. Negan gets face time with plot-pushing characters—Carl, Spencer, Rosita—plus there’s a few interactions I can’t help but think means the character will die sooner rather than later in the inevitable war with the Saviors. His mere presence sends everyone into a tizzy, and he laps up the chaos like an attention-starved tween girl. Mad props to Gabriel for being one of few to think clearly and quickly after the Saviors arrive, making it appear as though Maggie didn’t survive the miscarriage after all. Though his actions and his uncanny ability to startle their new overlord puts him firmly in the top five on my dead pool. That’s not a comfortable prospect for any character, just ask Olivia how gut-knotting a position that can be.

The big moments in the episode happen after Carl threatens Negan and the boss puts Alexandria on a firearm lockdown. Everything in the town’s vast inventory is collected. All except two handguns, which are in the books but nowhere in sight. Que panic. But only for Rick. Everyone in the town meeting has a look like they want to stand up, fight, put the Saviors in the ground in some spectacular way. Some of them, even after knowing Olivia would die without the weapons in Negan’s hand ASAP, were ready to arm up and roll out. Fighting for a cause is great, but pick your battles and don’t do anything at the expense of someone who’s devoted her entire time to easing their strife as far as supplies and inventorying them go. Eventually they disperse to search for the weapons. Olivia gets a surprise date with Negan . . . and possibly Lucille, too. Who has the guns? Spencer. There’s a complete lack of surprise when Rick notices the loose vent grate. Nor is it surprising to see more stolen food/booze in Spencer’s house. They established his paranoia early enough and firmly enough, his second betrayal doesn’t warrant a blink. Yet again, I wonder why Spencer thrives when characters with more potential are sacrificed to the plot monster. Then again, every show needs a scapegoat. TWD loves to lean on theirs, up until they kill them in some forgettable way. 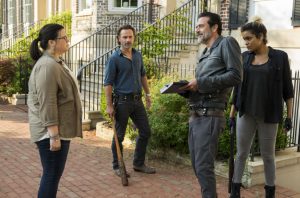 That bit of tension with the guns is so drawn out, it’s a non-issue by the time Spencer returns from his side trip with Rosita—fetching Daryl’s bike and having a long talk about accepting the new world order or bucking against the system. The time it takes to resolve any problem is the glaring issue in these 90-minute episodes. Audiences don’t have the attention span to properly appreciate Negan and Dwight’s mind games. They’re playing the long game in an instant gratification world. Fans want flashy conflict with well-defined reasons and minimal subtlety. Leave just enough plot motivation below the surface to make attentive fans feel clever, but everyone else wants a short-form action flick every week. They’re not going to get it. I know this. You may even know this, but one look at the fandom in general and they’re woefully unprepared to think through the Negan era. Character motivation has always been spoon-fed to them. All the little puzzles and plot twists have fallen away—remember how mad we were when TERMINUS was a cannibal’s wet dream and the CDC’s only solution to the apocalypse was to blow itself up—replaced by Richonne concerns and some serious story telegraphing whenever characters speak out against their leader. Spoilers: They always die when they question Rick for more than a moment.

Daryl is in the episode. He blinks a message to Rick, I guess. I’m so over Daryl’s story, I took Negan’s threat to heart and forgot the guy was in the episode until they showed another reaction shot of him looking awfully concerned, but it could be gas. 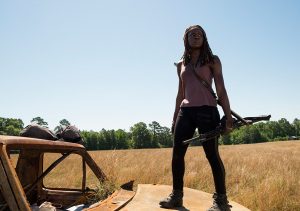 Looking to the future is difficult when the characters are settling in for a long winter under a crazed dictator. It could become seriously monotonous, with constant failed attempts to undermine Negan without full-frontal conflict. There could be a few solid hits from Alexandria which loosen his grip. They could all die in a firefight at three in the morning because Negan decided he wasn’t getting enough from them and wants the city. Whatever happens, it’s likely the blooming resistance force will be led by three people: Michonne, Carl, and Maggie. Michonne missed the shopping trip, but saw the town’s discarded/burned mattresses not long after promising Rick she’d try to work with the new rules. Settling for anything has never been Carl’s M.O., evident way back in season two when he wouldn’t, couldn’t stay put despite having been shot. There’s no need to say why Maggie will lead this rebellion until the day they win or she dies. Why them and not Rick? His speech to Michonne before taking her rifle. He’s got so much at stake, he’ll literally eat Negan’s feces to stay alive long enough to give Judith a Sweet 16 present. It’s no longer good enough to know any people survive in the world, Rick has to know his blood lives on after he’s gone. Obsession over one’s lineage is what doomed Henry VIII—he lost Rome’s backing, married like he changed his poofy pants, and in the end produced one legitimate male heir too fragile to remain on the throne, throwing his kingdom into turmoil years after his death. The lesson? Focusing fifteen-plus years down the road means you’re blind to the monster sneaking up behind you. Rick’s monster just happens to think he’s more useful alive. For now.