Ashy Slashy:
Review for Ash vs Evil Dead 208
by A. Zombie 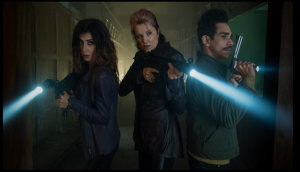 Episode 207 was the fantasy. A world Baal controlled almost completely, save flickers from the real world clueing Ash in from time to time while his gourd cracked from demonic mind games. This week, we peek behind the Wizard’s curtain to see how he pulled it off. How, exactly, did Baal make the delusion grounded enough to convince the poster boy for Stubborn Jerkface he’d imagined the last thirty years? There’s a little truth in every lie. A stand-in was brought in to act as Kelly and the facility’s security squad provided any necessary corpses. The icing on the cake? Linda is really there to sell the delusion story.

Thomas drags his wife and daughter further into his mess for the last time. He’s the sole reason Linda is at the asylum. Lacey is held as a bargaining chip over her parents’ heads, either they cooperate with the plan or she pays. That’s the problem with demonic deals, you can’t trust the sulfur-reeking bastards further than you can throw them. Lacey goes the way of the dodo, returning as a deadite to stalk the gang while they search for Ash on this doomed rescue mission. Pretty sure all the good deadite one-liners for the season are in Lacey’s dialog, especially during the final father/daughter moment. Turns out Thomas does have a spine. Unfortunately, Lacey left it on the floor for Linda to stumble across. There’s a few magical moments with the young deadite before Kelly blows off her head.

Plot twist! Ash’s plan actually works for once. What plan? The one he laid out before Ruby gave Pablo’s Necro-backside a kick to find the anti-Baal incantation. Yeah, like anyone actually thought he was serious when he said it’d be as simple as hiding a pet tracker on a demon. Sure, Ash went along with the tracker, but hey, it works. They have the book and the demon in the same spot. It’s not that simple, though. The danger to Pablo is real. Ruby is Captain Charming while they search the asylum, failing to reassure Pablo about his odds at every turn. On the other hand, Kelly is so optimistic, I thought she’d kiss Pablo at one point—except then we’d know how this would all end.

Pablo gives it his all, gets beat around a bit, too. But he sends Baal off in a spectacular splat, damn the odds. Or not. Baal’s final mind game comes in the form of leaving the Ghostbeaters wondering how to move on without their little buddy Pablo. Unless there’s immense magical interference, Pablo can’t come back from being bisected at the belly button. A shame. He really is my favorite on the show. Always on the bright side. There to lend a hand, especially since Ash only has one real hand. Dependable and kind, Pablo is—was—the perfect buffer for Ash’s abrasiveness.

Where do they go after killing off a main character and the bad guy? I’m not psychic, but I’m going to assume there’s some pretty hefty repercussions to a half-formed, deceased Necronomicon laying on an asylum floor. Plus, Ruby isn’t a saint. This is her chance to reclaim what her children and Baal took from her. Crap will hit the fan again soon enough.