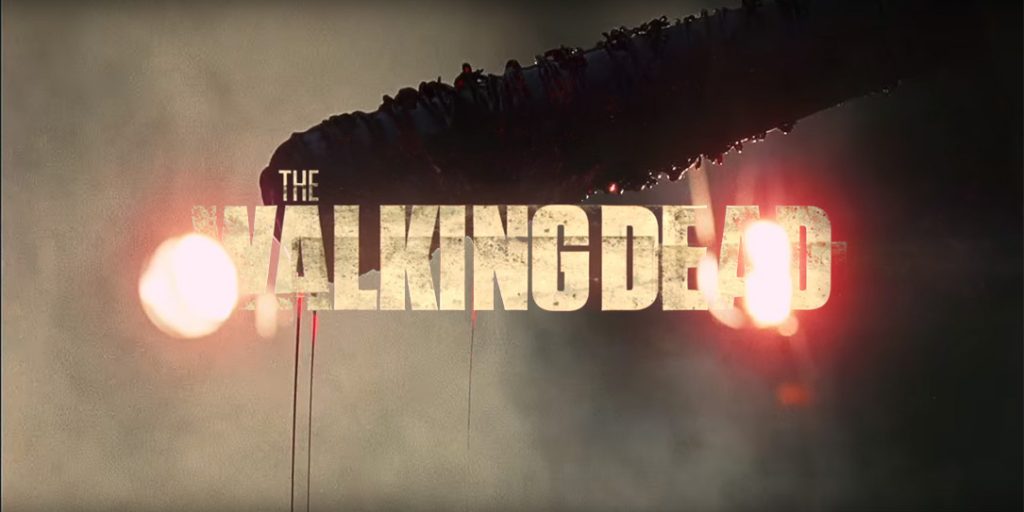 Swear:
Review for The Walking Dead 706
by R.C. Murphy

Episode spoilers below! You’ve been warned.

There’s so much foretelling in this episode, it’s pretty much an outline of how far down the humanity rabbit hole Alexandria will go in the coming episodes to appease the Saviors. The temptation to make Rick and company Those Guys, the ones who’d rob a woman-only group in order to save their own hides, is irresistible. Oh, it may not seem in the cards by episode’s end, but the idea is planted. 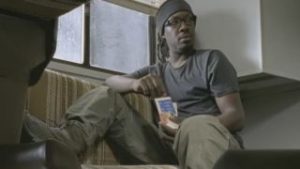 How do we meet this new Ocean Side community? By Tara washing up on the beach like a piece of debris blown off a yacht. But that’s not even what happens first. This episode suffers from an acute case of flashbackitis. So we open with soggy Tara nearly being stabbed by the world’s most aggressive tween, then jump back to her and Heath arguing about not finding anything during their two-week outing. It does this constantly, without real rhyme or reason, throughout the episode. Like teasing Heath’s welfare will finally make him a part of the TWD universe instead of using a rising actor’s name to leave on the credits for attention. Why bother bringing in hard-hitters if they get two powerhouse minutes in as many seasons? AMC likes to collect actors in their stable, then never unleash their potential. And for this reason, they jacked up continuity to force tension over the welfare of a character fans don’t know well enough to mourn. A shame, really. Heath’s passionate speech in the RV is some of the best emotional reaction work on the show. They made him virtually forgettable, but made it clear he’ll never forget what they did at that Savior outpost. 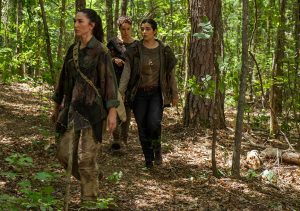 Okay, but seriously, what about the new community? After Tara wakes, she stalks her savior, Cyndie, through dense forest until she finds dilapidated cabins, but thriving people. Some seriously jumpy people, at that. As more of Ocean Side comes into view, one thing is evident: There’s only women, girls, and boys under a certain age. Anyone with a twisted mind took a whopping two seconds to figure out why this particular group came along at this point in the story—they’re the example of why not to fight the Saviors. An ill-advised war cost them every single man, plus any boy over ten, as well as their trust in humanity. Thanks to the Saviors, Tara’s greeted with gunfire and not a hot meal. It takes some talking, and Tara’s awful lies, to garner her freedom. Even that’s fleeting once Natania, Beatrice, and Kathy—presumably the women in charge—realize the grand story Tara tells of killing people at the satellite facility is confession that she attacked the Saviors. The latter two ladies take Tara out of the community, promising to help her find Heath, who ran off after she was swarmed by walkers. In reality, it’s an execution. Tara holds her own for a little in the fight, but Cyndie saves her bacon again, defying her groups’ kill-strangers-on-the-spot mandate in order to actually help Tara. There’s no Heath to be found, of course. He’s long gone, having driven off when Tara went into the river. The writers do take the time to stage a false alarm. It’s almost as if they actually care about Heath.

I’m not buying it. 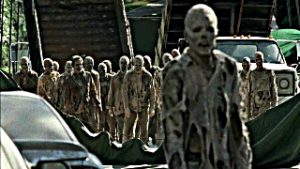 Even the walkers in this episode are pretty disappointing. The gimmick? A group buried walkers under fine sand and left them that way even after the living abandoned camp. Tara dislodges the sandcastle from hell by tugging on a duffle bag and out crawl a couple dozen walkers. For the most part, the makeup is done with heavy, dirty prosthetics or masks. Both leave the supposedly shriveled walkers with floating head syndrome—where it’s obvious the creature’s face is over a human one because the head is two inches too wide—instead of it reading as an actual monster. Rubber masks are for background actors, not foreground close-ups. What on earth were they thinking with this one? As far as walker gags go, the sand gimmick doesn’t sell as a threat, seems impossible it’d still be intact after all this time, and the sand-encrusted walkers look like rejects from the Universal Studios maze, not the show’s typical carefully-crafted feature creatures for the week.

Yet again, we’re distracted with a lot of nothing instead of getting what we want—Negan from Negan’s point-of-view. The Ocean Side community coming in now does about as much good as tits on a male dog story line wise. Not with the way it’s written. Not coming so long after Glenn and Abraham’s death, and spending a day inside Negan’s home-sweet-home. Sure. Okay. Negan had a bunch of men and boys killed. This is fully within the realm of believability from what we’ve seen. Shock us with his actions at last or get to the war already. This pointless floundering between does nothing but give airtime to advertisers. The episode’s only upside is Tara getting some solid laugh lines. Not worth an hour of my day.