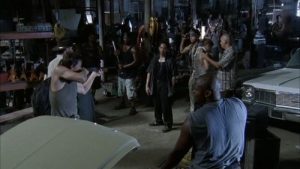 The ultimate fate of the Vatos has been up for debate since information leaked during TWD’s second season production linking at least one of the actors to the season premiere. Before the second season hit AMC, the scene in question—featuring Vatos leader Guillermo as a walker in the overrun nursing home—was cut. It’s not cannon if it’s never aired in the episode, right? That’s what we at the ZSC like to think, and it’s not just because we have a soft spot for these guys.

So what did happen after Rick and company armed the Vatos and left Atlanta for good? As always, I have theories. It was only a matter of time before the patients at the home gave in to the perils of old age and stress from constant walker threat. Sad to say, but the only way the Vatos survive is because their patients succumb to the inevitable. Guillermo and Felipe wouldn’t stay put after that. Not in an unsecure building smack dab in the middle of walker territory. We don’t know much about undead numbers in the areas around Atlanta, save the quarry, to really nail a new base of operations for the guys. With a crew in tow, going vast distances without a ride wouldn’t work. Hell, even driving fifty miles in the apocalypse is a huge risk. In the end, I fully believe the strongest Vatos would have made it out of Atlanta. Maybe they headed toward the ocean. Maybe they found a stronghold near their home city and fortified it. Those guys had too much heart and too many smarts to linger in the dead’s city once their obligations to their patients ended, or even before if things took a turn for the worst. G and his guys aren’t the type to sit and wait to die. For TWD writers to consider otherwise proves they don’t even understand their own characters’ motivations. 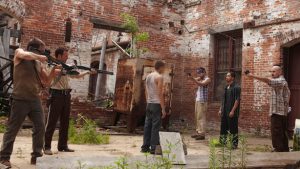 Guillermo provided one of the most surprising moments for Rick, simply because the guy’s leadership style didn’t involve slaughtering everyone and taking what they wanted. Matter of fact, G wasn’t even in a power position at the old folk’s home, just stayed because it was the right thing to do. That strong moral backbone is why Neil Brown Jr. was the perfect man to play the role. Keeping up with the guy’s career is a whole ‘nother matter. Post-TWD, Neil hit Hollywood hard and fast, appearing in projects like Battle: Los Angeles, Weeds, Rivers 9, Insecure, and NCIS. Then he got The Call, he’d landed the role as DJ Yella in the N.W.A. biopic Straight Outta Compton, which also stars O’Shea Jackson Jr, Jason Mitchell, Corey Hawkins, and Aldis Hodge. In 2016, Neil joined an eclectic cast, and an even weirder writer/producer, for BBC America’s Dirk Gently’s Holistic Detective Agency. Neil, and his furry costar Bentley, steal every scene they’re in. Dirk Gently will return for a second season. Catch Neil alongside Johnny Depp and Forest Whitaker in the upcoming film LAbryinth. He’s also in Sand Castle with Henry Cavill and Glen Powell, which will stream on Netflix in the near future.

It takes a special sort of soul to give up any hope of salvation in order to tend to those in need. Felipe could’ve split, leaving Abuela and the others to the undead. He didn’t. Not only did he stay, he still provided the nursing care the residents needed. Noel Gugliemi proved to be ideal for such a kind-hearted, but tough character. His smile is infectious, spreading to each fan he meets during numerous convention appearances. On the small screen, Noel has been a regular on Fresh Off the Boat, with appearances on The Mentalist, Chosen, and Bones. For the blockbuster Furious 7, Noel reprised his role as Hector, joining franchise regulars Vin Diesel and Paul Walker for another action-packed film. Since TWD he’s also appeared in The Dark Knight Rises, For the Love of Money, The Purge: Anarchy, and Vigilante Diaries. Catch him in the upcoming films Pope opposite TWD co-star Neil Brown Jr, and Charlie Charlie which also stars Tom Sizemore and Eric Roberts.

Vatos member Jorge never backed down from a fight. He provided the security G and Felipe needed to keep the patients safe. James Gonzaba went on to film several short films after TWD. He’s appeared on CSI: Miami, and fans can find him in the films The Return of Johnny V. and Gino’s Wife.

Ah, Abuela. No one was going to get anything past her, let alone the very men keeping her safe from day to day. Gina Morelli provided the perfect amount of sass for the role, giving me endless joy while watching a wall of strong men part like the Red Sea for her entrance. After the show, she went on to film several projects, including an appearance on the TV movie Fabulous High.

Need a hand, Miguel? I’m not sure Anthony Guajardo will ever live down the moment when Reedus flung Merle’s hand onto his lap. It’s pretty much burned into fans’ memories. Anthony was the first Vato on screen, giving us plenty of attitude and laughter. Since leaving the show, he’s worked on several short film projects like The Symphony of Silence, Arose the Coward, and Emily. Anthony joined Daeg Faerch and TWD co-star Noel Gugliemi in the 2016 teen drama Ditch Party. Recently, Anthony wrapped production on The Pizza Joint and The Margarita Man, so keep an eye out for the release dates.