Second Coming:
Review for Ash vs Evil Dead 210
by A. Zombie 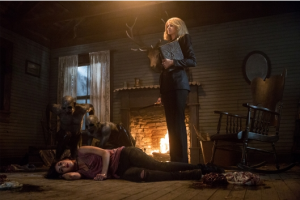 Henrietta doesn’t get the satisfaction of killing her idiot, Sumerian-reading husband. After he bolts with the Necronomicon, he’s stopped dead in his tracks in his VW Bug. The Prima Donna isn’t alone on her stage anymore. Enter Ruby. Again. This one is blonde. And very angry. It takes her no time to secure the book. Since it’s a short-format show, they waste no time jumping into the temporal-paradox thing by having Ruby meet herself. Past!Ruby is aghast she’d eventually team with El Jefe, seeing it as a betrayal. Now!Ruby speaks her heart, warning herself about her fall from immortality. But all Ruby has wanted is a family, turning her back on her children when she’s moments from bringing them into the world is impossible. Plus, she’s super evil. Ruby kills Ruby. Before she’s too weak, Now!Ruby does a little magic with the Necronomicon one last time to hurt her past self, then hands the burden off to Kelly. They really did try to send the kinder Ruby off with something resembling grace and compassion, giving her and Ash time to say goodbye in their own, bizarre way.

Her sacrifice is worth it the minute Ash’s hand reappears and Kelly announces they’ve actually changed the timeline. But wait, if he has a hand then . . . . Yes! Pablo lives. Kidding. Kinda. TheirPablo is in the demon realm. The Pablo in the trunk? Baal. Dude pulled a Skywalker and buried himself in the nearest warm body to survive. Ash’s vision wasn’t grief or drugs, it was Baal putting the whammy on him so he could find a new Ruby to manipulate. This time, Daddy is present for his spawns’ births. The birthing scene isn’t nearly as traumatic when the book vomits them instead of Pablo.

There is, of course, only one way to settle this beef between El Jefe and Baal—a fist fight. No powers. Man against man, without all that mumbo jumbo. The stakes? The demonic duo and their progeny scoot back south-side if Ash wins. If he loses? Hell on earth. And the spawn get to eat Kelly. The guys fight each other from one end of the cabin to the other. It takes about two or three destroyed rooms for Baal to use his powers. Ash faces off with Chet, who’s amazingly sober, and the fight is as funny as expected. The second ghost of the night appears not as a huge man living in the now, but as Ash’s sister Cheryl. She’s in and out of the scene so quickly, it’s easy to miss it. The Ghost of Christmas Past is Brock. There’s an agonizing moment where it’s impossible to tell if this is a demon trick or if Brock was brought back to life to screw with Ash’s head—I’m still not clear on it. Somehow we go from mourning Brock again to a chainsaw fight. Ultimately, all the fighting is there for the sight gags and cameos. The real fight is one of wits just when it looks like Baal will win. Ash disarms Ball with his crude humor and uses the demon’s own claw to kill him.

Ruby uses the downtime before her lover’s death to seduce Ruby to the darkside. It doesn’t work, of course. Not even after Ruby tries to beat optimism and loyalty to Ash out of her. Their scenes break up the fight, feeling more like an excuse to hit Kelly or have the demon spawn fondle her than anything which adds to the story.

The Necronomicon has a fit. It summons a portal to hell and in go the baddies. Luckily for us, portals are a two-way street. Like the beautiful phoenix he is, Pablo crawls from the ashes of the cabin. Is it really our little buddy? Ash hits him to make sure. Poor Pablo can’t catch a break. What a way to welcome back a hero.

Speaking of, Ash’s longtime service to humanity has finally been recognized. Once they return to the present, the town sets up a day just for Ash. Really, it’s a platform for Ash to finally tell the populace how awful they’ve been to him. They don’t mind the blunt outburst. They will probably mind that he’s moving back to town, since he’ll likely be up to his drunken, drugged-out ways sooner rather than later. Ash isn’t the only new person in town, Past!Ruby took her own time stroll. She didn’t perish in the hellfire which destroyed the cabin, and she wants revenge. It’ll be easier than she thinks, seeing as a bunch of kids just stumbled across the Necronomicon at the cabin’s ruins. Here we go again.

Now begins the wait for news about season three.