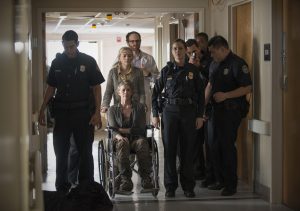 The patients and police inside Grady Memorial Hospital were never that endearing. They held onto a backwards work-for-safety program which enslaved countless people whose only downfall was the ill fortune to get sick or injured. While not every officer involved in the scheme was cold-hearted, they weren’t winning any humanitarian awards. This was a warning shot, a preview of what would come during the Negan era on a far larger scale. But did the hospital’s residents find as much success once their standing power structure crumbled seconds before Rick and company left them to own Atlanta? Sure, Amanda stepped up to present herself as a voice of reason. That doesn’t mean anyone let her take charge. They’d tasted power. Giving it up wouldn’t be easy. Luckily for Amanda, the officers who posed the deepest threat magically caught a case of dead. The flipside is, they lost half their fighting force and the patients don’t seem nearly as eager to strap on a bullet-proof vest and fight the undead as their deceased overlords. Holding the hospital would be hard, especially after all the human foot traffic drew walkers closer and closer. Given their resources, the best bet would be to stabilize the still-ill patients and begin moving to a smaller, more manageable safe haven. They had vehicles at the ready—one such car ran over Carol. All they had to do was find a building which hadn’t been blown to hell by the US government. Barring a surprise mutiny, Amanda would have been able to move her people to a safer building, while continuing to provide the only medical services within a hundred miles or more.

Teri Wyble proved to be the stand-out star hidden amongst the tough-as-nails Atlanta police officers throughout the Beth-kidnapping saga. We had a sense of who Rick was dealing with through their interactions with Beth, Noah, and the other patients, but Teri’s bone-chilling performance during the scene where they discuss how to use Amanda and Licari to get Carol and Beth is what sold the real threat behind Dawn’s regime. Since waving goodbye to the run-down hospital, Teri joined Powers for its second season as Nicole Glantz—a persistent investigative journalist for PTB News. She has also appeared on Zoo, and the military mini-series Six on the History Channel. In 2015 Teri joined Arnold Schwarzenegger and Emilia Clarke in Terminator Genisys. The following year she was in the Tom Cruise action flick Jack Reacher: Never Go Back. Her next project is Shock and Awe, also starring Milla Jovovich, Jessica Biel, and Woody Harrelson. 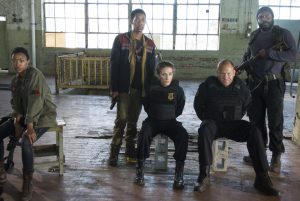 As probably the only practicing doctor in a hundred miles, Steven Edwards had the weight of the world on his shoulders. Bringing such an overwhelmed but cool headed character to life fell to the talents of Erik Jensen. Once his time TWD time ended, Jensen appeared on Major Crimes, The Blacklist, TURN: Washington’s Spies, Chicago P.D., and High Maintenance. Mr. Robot fans will recognize Jensen from his recurring role as conspiracy theorist and talk show host Frank Cody. Early 2017, Jensen appeared in Police State with Sean Young and fellow TWD alum Seth Gilliam. When not in front of the camera, Jensen spends his time on the stage.

Not all the tough-guy officers living inside Grady Memorial died in the name of Dawn’s endless thirst for power. Licari survived purely because he knew when to back down in order to see tomorrow. Christopher Matthew Cook filmed Roundball, Mr. Right, Ctrl Alt Delete, Billy Lynn’s Long Halftime Walk, along with a guest appearance on Zoo since shedding his Atlanta police uniform. In 2016, Cook joined Nicholas Cage and Willem Defoe in the crime drama Dog Eat Dog.

Franco lived in the fringe, just doing what Dawn ordered while not pulling attention to himself. Honestly, that’s all most people want and will do anything to protect their quest to blend in where they’re safe from most threats. Post-TWD, Rico Ball—the man who brought Franco to life—appeared as Deion Brown in the romantic drama Love N Success. Ball has also appeared in 3-Headed Shark Attack and The Boss. Last year, he was in the first season of Zoe Ever After.