Gearing Up for More Z Nation
by R.C. Murphy

First of all, we will not have to wait until October to visit with our zombie-slaying pals. The show will begin in September, possibly near the beginning of the month. However, Syfy has not announced a firm date yet, so keep your eyes out for an official announcement from them sometime soon.

Season four will have thirteen episodes. Episode four has a surprise guest director. Well, not much of a surprise because Keith Allan was still pretty wound up from his time in the director’s chair. Allan said of the acting/directing combo, “It was profound and exhausting.” Unfortunately, there’s no downtime in the end days and the gang was headed straight back to Spokane for work on episode five after the convention. The script for an upcoming episode scandalized Russel Hodgkinson, he admitted during one interview. Guess Doc talking to Elvis and sharing Z-weed with a zombie won’t be the craziest thing we see from everyone’s favorite character. D.J. Qualls was in attendance, much to fans’ relief. Citizen Z will return for the new season, and he’s got a huge weight on his shoulders. Family changes a guy, after all. Qualls said his character’s main focus is to make the world safe for their child. And maybe a change in wardrobe. Warren’s forthcoming story line should be interesting. Kellita Smith said, “This journey Warren is on this season scares and excites me.” If Smith is scared, we’re in for one heck of a ride. 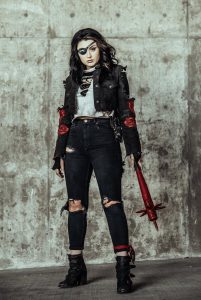 So what’s going on? The cast were pretty tight-lipped about specifics. We did learn that season four takes place two years after the season three finale. Why? The production team wanted the chance to hit the reset button for everyone—from the main crew, to the group in Zona, and beyond. They’re not going to ignore that timeframe; all the story gaps will eventually be filled in. The only thing we’ll be completely clueless about is Roberta’s new mission. While it will dominate the plot, the gang says nothing is actually revealed until episode thirteen. Not sure how they’ll keep the audience out of the loop that long, but color me intrigued.

After the cast spoke at their panel, the production announced the new guys brought in for season four—Henry Rollins, Tara Holt, Grace Phipps, and Michael Berryman. We also learned that Lucy will be a significant part of the season. And no, things are not any better between father and daughter. Murphy still has a lot to learn when it comes to fatherhood. Luckily he’s got the team by his side again to help with that.