When season three of iZombie ended, the gang was left in a chaotic world where humans just discovered zombies are actually a thing, and they’ve been living amongst them for quite some time. The characters didn’t move into this new world unscathed. Most, if not all, were in tough positions when we last saw them. Luckily we won’t have to wait until next year to check in with the team. At San Diego Comic-Con, the cast, along with Rob Thomas and Diane Ruggiero-Wright, dropped a video for the panel audience and delved into how things will change in season four now that Discovery Day has come and gone. 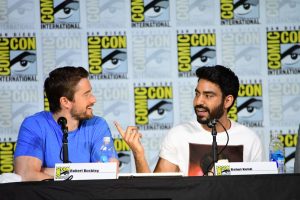 Thomas joked, “We almost immediately regretted that decision. So season three was a dream. We’re going right back.”

In all seriousness, Ruggiero said Discovery Day was always coming. Thomas laid the groundwork for it in the first season and considered season four the prime time to jump into the post-discovery world. He did say he thought he’d have more episodes per year to help smooth the transition, but they’re still plowing ahead with the plan anyway. Ruggiero said season four will be a, “whole new world.”

That world means quick adaptation from all the characters. Major found his place before season three ended, and Robert Buckley confirmed that Major is very much a company man from here on out. He believes in what Fillmore-Graves can do for zombiekind. This is also Major’s only chance to finally find a community who won’t drag him through the mud for the Chaos Killer thing. Not to mention, working on the frontlines in the new zombie city is distracting enough to keep his mind off Natalie’s demise. While Rose McIver feels that Liv will find some freedom post-discovery, she said Liv will very much need her friends and community in order to feel comfortable being “out” as a zombie. Clive’s plan? Malcolm Goodwin admitted it’s still going to take Clive some time to adapt, despite being on Team Zombie, but he will be all-in to help Dale. At last Peyton has some power in town. Aly Michalka dished on what’s in store for her character, who’s one of few humans who didn’t flee Seattle. Most notably, we’ll get more time with Peyton doing her actual job, in a courthouse—color me surprised. 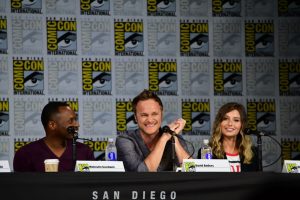 Blaine may be the only character represented on the panel who’s going into this New Seattle with one hell of a game plan. First, David Anders confirmed Blaine will be his delightfully nefarious self still. Then he dropped the bombshell that Robert Knepper will become a fixture on the show. Lastly, we learned that Shady Plots got a renovation. The funeral home will become Romero’s, a high class restaurant for discerning, wealthy zombies.

Season four will not return to the early-season formats of one big bad tormenting Team Zombie. Instead, Thomas says the characters we love will fight battles on just about every front imaginable. We have Angus’ return. There’s also a new human terrorist group to replace the Truthers. Thomas gave two possible names for the group, Up With People or Dead Enders—I think the latter is the final name, the former the working name during planning stages. Not to mention, Fillmore-Graves will still be in town, and they’re pretty much running things in a military manner, much to Team Zombie’s dismay. Another big change is that Liv won’t be the only zombie working with a detective. Every detective has a zombie partner in New Seattle.

Surprising no one, Thomas announced Liv will have a new love interest . . . and then said nothing else about him, except that the guy was named to create a specific ‘ship name down the line. Because what Liv needs in her life is another writer-forced gimmick.

The show will attempt to tackle some serious topics this season. One story line in particular focuses on health care refugees who swarm New Seattle in order to turn zombie so they don’t die. With that comes the typical problems of housing and food supply. At all turns, when it comes to how zombies run the city, Liv’s people and Fillmore-Graves will butt heads. So, I’m assuming there won’t be another random attempt to get Major and Liv together again anytime soon.

We have no dates yet for the new season, but it’s safe to say they’ll follow the usual time frame and come in during the spring.