We left our intrepid heroes at a grim place. Roberta and Murphy were injured with the same bullet. Zona forcefully collected a bunch of scientists. Addy, Lucy, and 5k went for a flight off a cliff, but forgot their wings. 10k and came back. A Zona ship hovered over the rest of the gang and seemed to aim their weapons straight at them just as the episode faded to black. 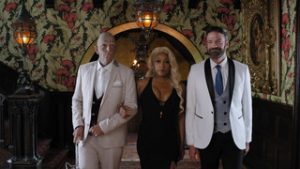 Two years later, things aren’t much better for the crew. Except Murphy. Like always, he’s adapted to his situation and flourished in ways no one alive could ever manage. Yes, alive. As in cured. No more blue dude or the suave white-haired devil, Murphy’s embraced his natural hair color . . . and sweater vests. He’s also secured a pretty plush life as Zona’s savior, a life which spreads to Roberta the instant she wakes from a two-year coma. It wasn’t a nice nap. Oh no. She’s plagued by a nightmarish, smoldering landscape dominated by an ominous black arch. These visions are nutso, folks. Intense, come out of nowhere, and sometimes contain things which make no sense now, but will probably be some brilliant epiphany down the road. Because that’s just how the show works sometimes. The visions also trigger a ripple-effect of small disasters plaguing Roberta. We haven’t seen the last of those flames, that’s for sure.

Elsewhere in the world, Doc’s become a seriously competent zombie slayer. With grace he’s never expressed before, Doc performs a hammer dance with a few undead’s skulls. His shining moment lasts about two minutes, then 10k whacks him upside the head in a case of mistaken identity. This new 10k, or Tommy as Red calls him, is a lot chiller than before. Almost too chill. He’s kind of an emotional zombie at times and it’s coming across awkwardly. The trio are heading to a pick-up spot for what’s promised to be a new start for humans up north where it’s too cold for zombies to survive. This could possibly be Citizen Z and Kaya’s new thing? There’s no confirmation of who’s in charge, only that there seems to be actual military involved at the camp. Oh and Sun Mei. 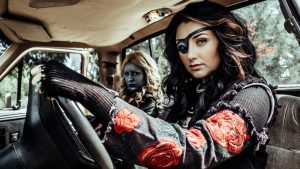 They’re not the only ones banking on the hope promised in this safe haven. Addy and Lucy are road-tripping to a better life. Along the way, Addy stops frequently to play hero. It also gives Lucy a way to work on her powers. The two don’t see eye to eye on some things. Especially if Lucy is on Addy’s right side, what with the missing eye and all. But their disagreements don’t stop Lucy from helping Addy help humanity even though the mission is long over. Which is how they’re caught by someone who may or may not be Zona goons. 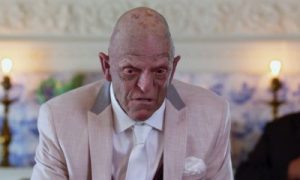 Zona is . . . freaky. It’s obviously some man’s idea of heaven, all 1950’s middle-American city, complete with aimless afternoons playing leisure sports and women in skintight dresses. Murphy introduces Roberta to The Founder, an extreme survivalist who supposedly saw the zombie outbreak coming and set up a refuge for his wealthy pals where they could wait it out. No doubt the place will only get weirder as the season progresses.