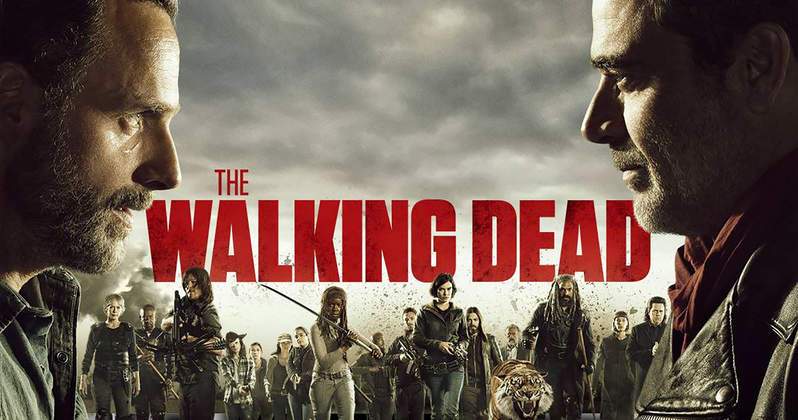 The Big Scary U:
Review for The Walking Dead 805
By R.C. Murphy 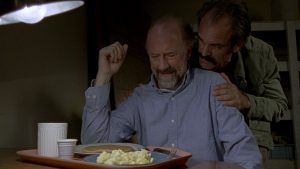 What’s this? Another flashback opening sequence with scenes bearing no weight whatsoever on the actual plot, containing information which could have easily gone somewhere else? Gabriel prays, it’s his thing. It didn’t have to happen in a flashback. As for Gregory, his love pancakes, and the super-secret meeting with the Saviors? Uh, duh? When they came out to chat with Rick, he wasn’t under duress. The play all this time has been to kindly, but firmly lead the little weasel by his nose so his people continue to provide produce for them. The meeting itself more or less took place during the same conversation with Rick, sans a few tidbits and the power squabble. I would’ve been more impressed with the show opening on Negan lunging for Gabriel. 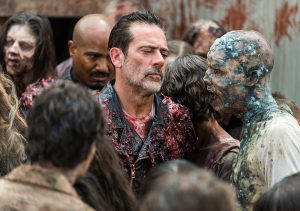 The pair are still trapped in the flimsy trailer surrounded by walkers. Negan relieves his tension by picking on Gabriel, looking for his weak spots since he’s got all the time in the world with the guy. Not really, though. The trailer’s wall are already failing. There’s another problem, too. Instead of mounting a rescue, Negan has a feeling his guys will implode on the leadership front without him there to steer the ship. Which is pretty much what happens. In order to save what he’s built, Negan needs Gabriel to help him fight through the horde. There’s a tussle. And a bargain. In the end, they each confess a sin before slathering themselves with zombie guts. The ruse doesn’t work as well as they hoped.

Power dynamics are often lost on the soldiers. In this case, Negan’s captains understand some of what it takes to run the organization, but not a one of ’em has the wherewithal to see that every last person under them stays in line. They assume he leads by pure fear. Yeah, no. Negan leads by hope. That hope may be the grimiest thing to be dragged out of an apocalyptic landfill, but it still puts a roof over their head, water and food in their bellies, and surrounds their home with an army to keep the dead at bay. The workers are promised isolation from the ongoing war. In return they take what they’re given without complaint and do the work required of them. When the few comforts Negan provided dry up after his assumed demise, the workers’ hope vanish into the dark. Confronted with the chance to actually be Negan, every last one of the captains fails. It takes Negan all of thirty seconds to fix it after he and Gabriel finally make it inside.

It’s going to be a lot harder to fix the mess left amongst his captains. Not only does Simon think he’s in charge, but Gavin also points out that the only way the surprise attack works is because insider information has been leaked to Rick. One smidge of evidence may give the game away. Eugene notices red paint on a gun bag given to the workers which helped in their near-triumphant coup. Dwight has a new chess set, which he painted himself that very day. Odd hobby, but I’ll but it. Not sure Eugene’s going to have a chance to use his knowledge just yet. He’s more preoccupied with Sanctuary’s new guest . . . who’s suddenly got a fever and an overwhelming desire to break the doctor out of there. 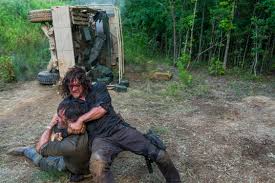 Meanwhile back on the highway, Daryl and Rick have a nice chat with Yago, the Savior who almost delivered the guns to the Sanctuary. They get all the details from the guy, down to the identities of the meager few who walked away from the fight. Pretty much the second the guy bites the dust, Daryl is ready to ditch the master plan and improvise. There’s TNT in the wrecked truck. With just a little, they can blow Sanctuary’s gates, let the dead in, and problem’s solved. They can move on already; help the Kingdom regroup. Rick is the rational one for once, bringing up the blameless workers living in the same compound. The guys fight, the choreography echoing the first fight these two had at the rock quarry. Except that time there wasn’t an exploding truck. So much for the guns and dynamite. The guys split, Rick heading somewhere and Daryl’s off to Alexandria.

The somewhere is the giant trash heap of Please Stop Going There Already, according to the previews. Like they didn’t have enough problems with these people already. Sure, let’s try one more time when you’re desperate and the only bargaining tools you had blew sky high because your bestie can’t control his temper long enough to get them clear of a wrecked truck. This isn’t going to end well.