Sometimes, just sometimes, I regret closing my eyes and jabbing a finger at the TV to determine what film to watch next. This time around, Fate brought Zombie Wars to my attention. Fate is fickle and persnickety and if they know what’s best, they’ll avoid dropping any such movies into my path again. Yes, I feel betrayed by the universe for not making an executive decision—this film is that painful to sit through.

The premise is, surprisingly, not half bad: Fifty years after the undead rose and swept the cities clean of humanity, the struggling few left alive have banded together in militias or small settlements. Brothers David and Brian, under the leadership of General, take it upon themselves to track a zombie gang who’ve been kidnapping droves of humans then herding them to a farm not far from two human settlements. During a mission, the brother rescue half a dozen women. The heist doesn’t go unpunished. Pushed from their camp by vengeful dead, the militia regroups, but David and newly-rescued Star don’t make it. They’re put into the breeding program at the intelligent zombies’ farm. Eventually word gets to Brian and General. A rescue plan kicks into gear, despite no help from the human village nearby. Inside the farm, the humans who speak out are eaten. Those who behave work on growing food or growing babies. David and Star find an ally, Sliver. But he’s not who he says he is, and once everyone learns the truth about Sliver’s purpose with the undead, the farm’s days are numbered. That being said, what’s captured on-screen doesn’t live up to the potential. 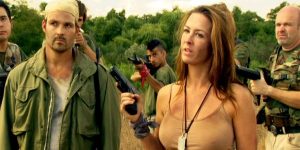 The sudden twist audiences are always begging is right here. Unfortunately, the execution lacks everything, especially a budget. The sets are mostly tents or on location at a rundown farm with little built for the production and Spartan set dressings. Costuming is all straight out of a thrift store, dragged through a hasty apocalypse makeover, and tossed onto whatever actor passed by—the exception is General who gets a stereotypical Tough Woman wardrobe, complete with cleavage for the few scenes where the script tries to make her and Brian a thing. As for the zombie makeup? I’ve seen better at a school haunted house. Some zombies look like they went the DIY greasepaint route. Featured zombies were only slightly better. Some have homebrewed FX appliances to make elaborate wounds . . . which unfortunately looks little better than ye olde classic liquid latex and toilet paper bite marks. 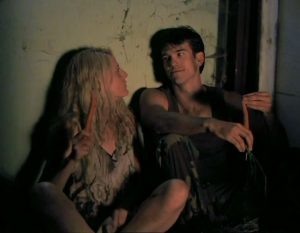 Then there’s the downtime in the script. It takes so long for David to reach out to Brian and General, the rescue squad pretty much literally twiddles their thumbs for more than half the film. Every time we cut back to them, it’s another awkward conversation about how they should do something, or they’ve cram in a scene which is in the end meaningless because it’s an excuse to plant a romance subplot which is eventually resolved, but not in a satisfying way. However, over on the farm there’s this whole intrigue with the supply chain and Sliver’s seemingly magical ability to get whatever he needs without being eaten. The characters spend so much time in so few locations, all the scenes blur into one long, droning memory when looking back. Instead of breaking the action bits into smaller scenes and dispersing them through the whole film, it’s bookended by fighting, leaving the middle lacking tension.

Overall, the film’s potential doesn’t outweigh the execution. I’m giving Zombie Wars two crumbled skulls out of five. This isn’t even a good film to torture friends with after copious drinking.