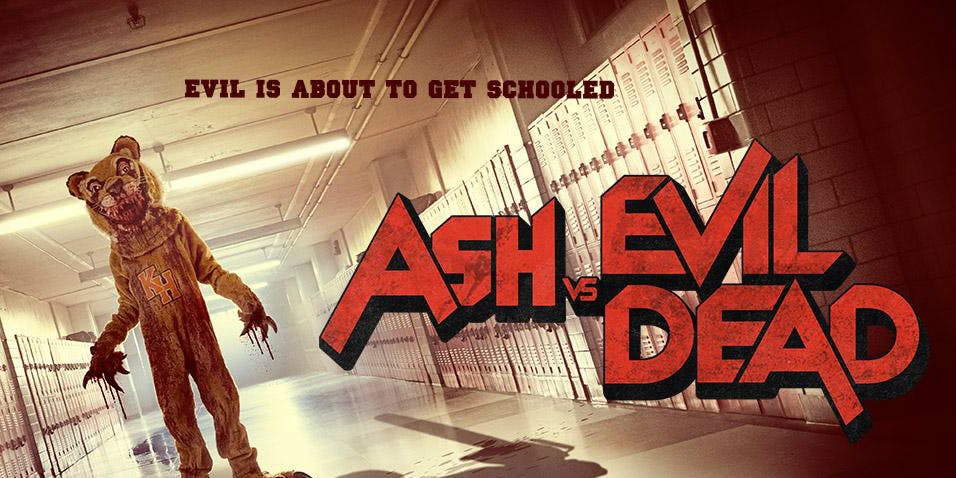 Apparently Dead:
Review for Ash vs Evil Dead 303
By A. Zombie

Before you dive in, just gotta let you know that there’s episode spoilers in this review.

Hope you sent your good suit to the cleaners before tuning into this episode. 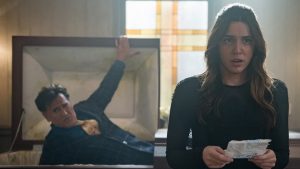 Funerals are never comfortable occasions. Unfortunately, Brandy has to learn this the hard way, starting with the funeral home’s decision to restore Candy Barr’s head without asking the family what they’d like done with the body before burial. Yeah, the writers went there. So, uh, Scotch Guard your suit, too, and let’s attend the funeral of Candice Barr, loving mother and hastily-wedded wife. She’s gonna rest in pieces.

Unprepared as usual, Ash’s true colors come flying through the second he enters the church for the service by snagging flowers from a vase for Brandy. It’s the lack of care which leads to the primary problem during the funeral scenes: Deadite Candy. If he’d just checked in with someone during the body’s prep, he could’ve told them to leave her as-is for a closed casket service. Whose bright idea is it for Brandy to be near an open casket after seeing her mom’s decapitation anyway? Ash tries his best to fix the problem without his daughter being further traumatized. Like every good deed Ash attempts, it goes horribly wrong.

The coffin fight won’t win awards for stunt work, but it’s by far the most unhinged in terms of propriety. Yes, worse than the Slip N Slide with semen. Just about everyone’s been to that one funeral as a child where they spend most of the service convinced the deceased will crawl from the casket. This is the culmination of all those fears, plus a garbage bag load of Ash’s failures as a family man. Spice it with a dash of embalming fluid and they’ve created a funeral scene to top anything we’ve seen on TV before. Some of the best deadite detail work so far this season went into choreographing this scene and creating stages of damage to Candy. The payout during the eulogy is worth being mortally aghast on Brandy’s behalf while her parents have their final fight. It’s so well done, I felt like a heel for laughing as Ash puts Candy’s mutilated head back with her body. 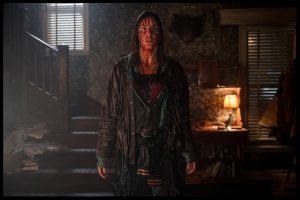 Brandy will never forgive her father for what he’s done now, and Ruby knows as much. Or is it Ms. Prevett? Either way, the school’s counselor thinks the best place for Brandy is at her home, away from the father the girl just met and the inevitable chaos dogging his heels. After Brandy runs from the funeral, Ruby confronts Ash to taunt him before driving the girl to go get her things. A brash play, but this Ruby spent months laying the groundwork for her plan and has the town’s trust thanks to her hard work with the school. Ash, in comparison, is as trustworthy as a hungry coyote tasked with watching a chicken coop. It’s easy to see how Ruby’s calm demeanor appeals to a young woman better than her brash, vulgar father who couldn’t even re-kill his wife without it turning sexual in some way.

Someone in mourning probably shouldn’t be left alone in an unfamiliar place. To ensure Brandy gets what she needs from the house, and to lift her spirits a bit, Ruby sends someone to keep her company. Everyone’s getting a second chance in this episode, including Brock. He bonds with his granddaughter a little at Ash’s expense. The lead-in to the reveal is solid. The new energy from Brandy’s presence does wonders for the show’s tension. We needed fresh eyes on the evil. Everyone else is too jaded. Watching Brock’s second demise through Brandy’s POV brings back the era of startled, inappropriately timed laughter for the franchise. The groan-worthy schticks are okay, but nothing beats fighting not to laugh at someone’s genuine horror in a completely ridiculous situation. 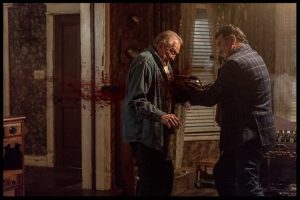 The rest of the Ghost Beaters, plus Dalton, are sent on a critical Save The World mission by the Brujo’s masked messenger. An old, evil book isn’t the only thing salvageable from the cabin’s wreckage. The Kandarian dagger is still down there somewhere, waiting for whoever digs it up first. The gang’s on-task, wasting no time. Kelly is the one to find the dagger. Its powers draw Evil their way. Dalton gets caught in the chaos. As a deadite, he tries to drive a wedge between Kelly and Pablo, blaming Pablo for impaling the fallen Knight on a tree branch. It’s not clear if Kelly buys it, and Dalton doesn’t get another chance to convince her what with a truck grille in his brain and all. Will the Ghost Beaters go through Knights like Spinal Tap goes through drummers, or are they about to answer for Dalton’s death? Maybe they’re already paying the price since Pablo’s MIA after the deadite’s death.