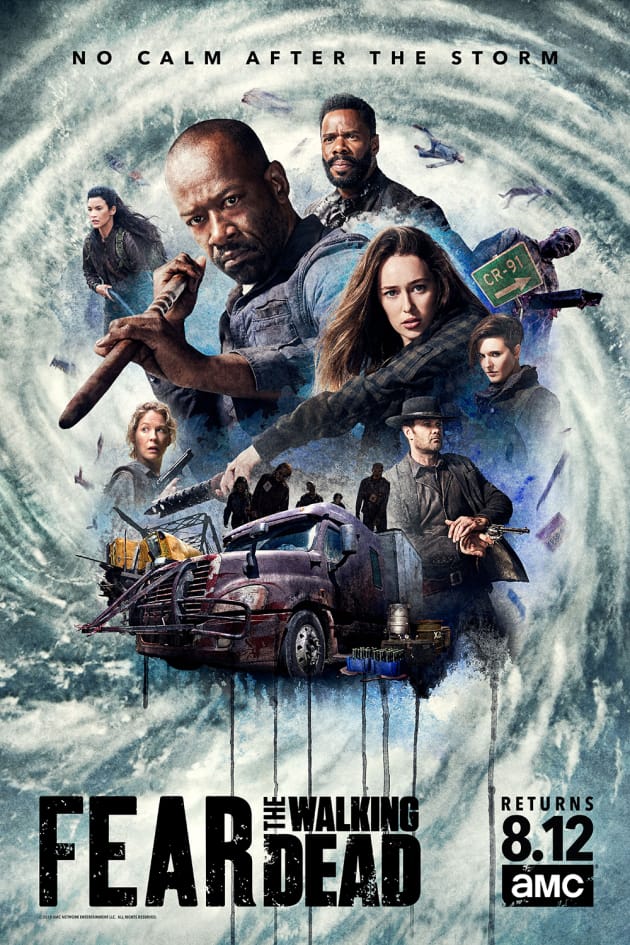 Fear the Walking Dead Crawls Back to AMC
by R.C. Murphy 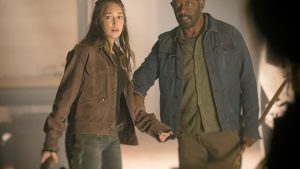 Over the course of the fourth season for Fear the Walking Dead, the production team flipped the show on its head. And the season isn’t even halfway finished. Gone is the linear timeline—with no promises from the showrunners to return to the storytelling style from before. Fans were treated to a whole new set of characters and their ever-evolving problems. A strong love story came in, highlighting the need for happiness in the show to keep it feeling fresh. Happiness that wasn’t yet another temporary, overly dramatic, possibly ill-considered relationship for Alicia. Then came the biggest turn in the show’s history: The family is no more. In order to move in a new direction, they cut most of the ties to the past via Madison doing what she did best, right to the very end. Not only was it a shock to the fans, but the cast, as well. Coleman Domingo spoke in an interview about the dual departures, going into how hard it was to lose coworkers who’d been there since day one. What did it take to translate that emotion to the screen? “It required intense amounts of grace, and patience, and frustration, and being honest about your feelings,” Domingo said.

I’ll be honest, I lost track of this show again, despite the appeal of Morgan’s crossover—the character is amazing and I kinda wanted to keep in touch with his story. When the Madison/Nick news dropped, I regretted lagging behind and seriously considered a quick season four catch-up. Other things the cast and production team said during their 2018 San Diego Comic-Con panel made it even more apparent that the deeply problematic show I left behind is not the show that’s on air now.

Not only that, much like the cast from the sister show, those who were onstage for the FtWD SDCC panel appeared happier. More relaxed. The jokes and banter were actually funny. At one point, everyone in the hall wished Alycia Debnam-Carey a happy birthday. More than the renewed joy, even the concepts they spoke about morphed from discussions which highlighted the cringe-worthy, racist nature of the previous seasons’ plots, to pointing out how the incoming storm teased in the trailer is, essentially, a visual representation of Alicia’s grief. It’s a massive difference and makes the show more inviting to new audiences.

And let’s not forget the drastic uptick in poo jokes thanks to Lennie James and the showrunners, Andrew Chambliss and Ian Goldberg. Believe it or not, it’s completely relevant to the show. Let’s just say they’re bringing in a whole new level of realism to Morgan’s story line and leave it at that.

The second half of season four will find Morgan struggling to figure out if he belongs with these people, or where he belongs if not with them. Alicia’s forced to mourn her family while enduring a storm chalk full of airborne undead. She’ll even have her own character-centric episode at last. Strand grasps for comforts from the days before hell came to Earth and seeks shelter in a mansion, complete with wine cellar. Everyone else from the stadium will use the remaining episodes to find their purpose and place in a world suddenly devoid of their leader. Chambliss told Syfy Wire, “The back half of this season has all of our characters asking themselves . . . ‘What do we do to move forward? Who are we to each other? How can we come back from all these really dark things we did?’ We really view this as an ensemble show, and we’re going to be telling stories throughout the back half of the season that will focus on different characters grappling with those existential questions in different ways.”

On top of the already introduced new characters for season four like Jenna Elfman’s multiple-named character, Maggie Grace’s Althea, and Garret Dillahunt’s John Dorie, there are even more new faces coming onboard to flesh out the ensemble. Aaron Stanford, who just wrapped the astounding Syfy series 12 Monkeys, makes his way over to FtWD for even more genre weirdness. Parks and Recreation‘s Mo Collins has the potential to bring a whole new vibe to the cast with her vast comedic career. Tonya Pinkins, who played Ethel Peabody on Gotham, is also slated to make her appearance soon. Daryl Mitchell, better known for his comedic roles in Galaxy Quest and 10 Things I Hate About You, will bring something different to the franchise—a disabled character played by a disabled actor. It’s about dang time the genre got better about disabled representation, and Mitchell’s on-screen energy makes the casting choice just that much better. Stephen Henderson (Fences) rounds out the new FtWD cast that’s been announced so far. It’s an insanely talented group coming onto the show at a time when everything is in flux.

Oh. Oh, man. So this is what it’s like to be actually excited about the show again. Never thought that sensation would ever return.

Speaking of returns, Fear the Walking Dead returned to AMC on August 12th, so there’s no need to wait any longer. Jump into season four. Go ahead. I think it might actually be worth the time.

The summer of 2018 has been quite transformative for the cast and crew for AMC’s smash hit series The Walking Dead. Right off the bat during the San Diego Comic-Con panel we know something’s changed. There’s a serious difference in the energy onstage. It’s not just Yvette Nicole Brown’s infectious enthusiasm, either. For heaven’s sake, even Andrew Lincoln has an earnest smile on his face throughout the entire thing instead of just looking as tired as he should be after filming. Let’s be honest, working on the show is hard. We’ve all heard the stories about the heat and ticks. Usually everyone’s rough around the edges and thankful they’re in an air-conditioned building. Not this year. This year they vibrated with excitement. Too much excitement, sometimes. New showrunner Angela Kang let fly an f-bomb during a mutual respect fest with Jeffrey Dean Morgan at one point. Most everyone took a minute to sing Kang’s praises, in return. This was a level of affection between the production team and the cast we’ve yet to see, honestly. Even amongst the production team, too!

Promoting Kang seems to be the Thing. That Thing some fans have waited for to turn the tide. Dare we hope things are actually changing for the better? Keep in mind, Kang is responsible for the heart-wrenching episode where the gang says goodbye to Dale. You know, the one with that amazing speech? Including this too-fitting gem: “If we do this, we’re saying there is no hope. Rule of law is dead. There is no civilization.” Color me a little excited to see a return to that style of drama on the show.

Right off the bat, after everyone settled down, Kang confirmed that the long-awaited time-jump will happen leading into season nine. Maggie has the baby at last! Thus endeth the longest pregnancy on cable television. Kang alluded to the survivors building on the hope seeded in season eight, while simultaneously watching the infrastructure from the old world crumble around them to return to nature’s rule. Nicotero later expanded on this idea by pointing out how far-outdated (he says “ancient”) technology will have more value for the survivors than, for instance, guns with their finite amount of ammunition and supplies to continue making it. So they knock off a few museums and make off with the covered wagons, who cares? Now they’ve got the means to move without scrounging for fuel that isn’t there anymore. But all that forward progress has other kinds of consequences, as Gurira pointed out. Some people will want to do things their own way. We saw a group at the end of season eight who were very much not onboard with Rick’s “kill them with kindness” plan. That distrust doesn’t just vanish. Cohan talked super vaguely about how Maggie will deal with Negan’s continued survival in this better world she’s helping build—basically, she will deal with it, so just wait and see.

As Lincoln pointed out, there was a rather large elephant on the stage with them. For weeks the rumor mill churned out talk of his departure from TWD. Kirkman accidentally spilled the beans on the reality of the exit in his own panel before the TWD one in Hall H, so all Lincoln had to do was try not to cry while confirming his exit. He went on to pour his heart out, sharing the devotion he’s felt from the cast/crew and fans for the last decade. In an aside, he pointed out that his two of his all-time favorite episodes are coming up in season nine. Wonder if it’ll be easy to spot them. He later called the upcoming season, “Cowboys and zombies.” Which is more in-line with where some thought the show would go than where it ended up during “All Out War.”

Expect some new settings in the new season, specifically D.C. (at last!). Other new things include new styles of undead, according to Nicotero. Kirkman teased a “whispering zombie”, as seen in the trailer. There’s some new animals on the show, namely horses, which forced the production team to relearn the meaning of patient, it seems. Lastly, there’s a handful of new cast members joining the gang. Zack McGowan will play a Savior. Dan Fogler will be Luke. Samantha Morton was announced a little later as Alpha, the leader of—well, look at that—the Whisperers. Guess that explains the talking supposedly-dead person. There will be more cast announcements soon, no doubt.

The main panel portion rounded out with some funny stories from the cast. Gurira and Lincoln ribbed each other about their horse riding skills. Reedus gushed, yet again, about the forbidden wheelie he popped during filming while Lincoln clung to the back of the seat valiantly delivering his lines. There was even a prank war update, complete with a heated discussion as to the validity of Lincoln’s latest volley in the long-standing battle of wits. Brown passed question duty off to the fans for about nine minutes to end the panel.

The Walking Dead returns to AMC on October 7th. There is a season nine preview special, hosted by Brown, on Sunday, August 5th at 9 PM.