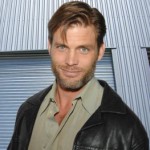 There’s a bit of a difference between gunning down giant alien bugs and taking down the shambling undead. However, Casper Van Dien seems content doing whatever it takes to ensure the continued survival of the human race. This willingness to do what needs doing brought Casper to the attention of the Zombie Survival Crew command. Not that we didn’t already know, what with his roles in Starship Troopers, Sleepy Hollow, The Omega Code, and numerous other television shows and movies.

With an impressive array of roles under his belt and military men in his family, Casper has picked up important skills needed to be a commander in the ZSC. Working from an undisclosed location, he will use those skills to help mankind overcome the undead menace during the Zombiepocalypse.

Weapon of Choice: Morita Assault Rifle with his Tarzan knife and bow as backup. He would also love to use his marauders suit and be “a lean mean zombie killing machine.”