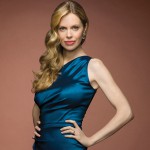 Best known for her role as Pam De Beaufort on HBO’s “True Blood,” it wasn’t Kristin Bauer van Straten’s skill with fangs that caught the Zombie Survival Crew’s attention. No, what got us is her total commitment to helping animals. During the Zombiepocalypse, our pets will be at risk. Kristin reminds us that they too are members of our families and need to be protected from the undead when they rise.

Coming to us from the Los Angeles area, Kristin will lead the effort to ensure our furry crewmembers are provided for during those tough times. She also maintains a watchful eye on the larger corporations potentially responsible for creating the zombie virus through their environmental impact.

Note: (named by True Blood’s Dan from Masters Fx after he created it for the movie “Slither”). Slither Slime was actually invented by our military for crowd control. It makes a human, or a zombie, so slithery and slimey that you can’t stand or run, and if you do try to punch of grab another you just slide right off. If you doubt this would work, you need to see “Ghost Busters II” again.

Proud Member of the Purple Brigade