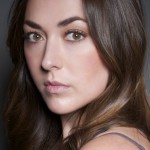 Second Lieutenant Schaible has special ops training in Bak Sil Lum which will come in handy on her current film, WANTAD, written and directed by Stefon L.C. and produced by L.C. along with Broderick Crawford, where she will be kicking ass and taking names and just as handy in hunting zombies. She also just wrapped a feature called Crossroads, written and directed by Rydell Danzie and a short, silent film, also by Danzie, where she played a vampire’s pregnant bride making her all too familiar with the undead. Her combination of fighting skills and knowledge of the undead make her a prime zombie hunting badass…