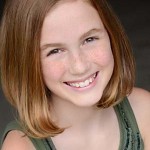 Young actress Madison Lintz joins the Zombie Survival Crew with quite a bit of hands-on experience dodging zombie attacks under her belt, thanks to her time on AMC’s hit series The Walking Dead. She comes from a family of actors, including her siblings and mother, Kelly. Madison has been busy lately with the release of the film After and the upcoming film Parental Guidance with Billy Crystal and Bette Midler. She can also be spotted in the show, It’s Supernatural, and TV movie, American Judy.

When Madison isn’t auditioning for roles or filming, she travels the country from convention to convention, meeting fans, warning them of the dangers the undead pose, and making everyone’s day a little bit brighter with a smile. Madison joins the ZSC from an undisclosed location where she and her family are well prepared for whatever happens when the Zombiepocalypse sweeps over the earth.