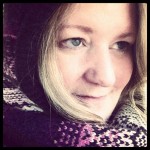 Need help with web design? She’s a graphics designer. Being chased by zombies or secret government organizations? She’s got evasive maneuvers that have made the toughest of ZSC Commanders quiver like frightened children. Got a funny noises in your attic or in closet? Things that go bump in the night? Who you gonna call? Not Sergeant at Arms Mick Muise, because we need her.

Full time graphics designer, part time ghost hunter and spider slayer extraordinaire, Mick’s many talents have secured her place as one of our Commander in the Zombie Survival Crew’s most valuable assets.

Through her uncanny ability to translate even the most undecipherable coded transmissions and whip up the perfect graphic image at a moment’s notice, Mick has aided our Commander in Chief in the most desperate of situations. She’s chauffeured fellow crew members through unfamiliar territory on various scouting missions, food supply runs, daring rescues and thrilling escapes. Despite the fact that she has has been in traction for months because of our Special Forces Commander’s infamous silver trunk, she remains ever vigilant and ready for action when needed.