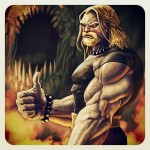 Don’t mess with ZSC Special Forces member, Brimstone. His name alone should give potential zombies something to consider as their brains decay and the hunger takes over. A man of many talents, Brimstone started his career on “Sesame Street” and “Romper Room” before moving on to a musical career, and finally finding his spot in the ring wrestling for the leaders in sport entertainment nationally, internationally, and across the independent circuit. His in-ring persona can’t be stopped, and jumped from wrestling to a comic book and animated series, Brimstone and The Borderhounds; action figures; the Border-Pups children’s book series; the “Borderhounds” video game; a few web series—you name it, he’s claimed it as his domain. And who are we to argue?

When he’s not maintaining his home in the Barren Wastelands, Brimstone volunteers his time aiding numerous charities and causes, including: RADD (Rockers Actors and Athletes Against Driving Drunk), and Project Meridian Foundation. Even tough guys have hearts of gold. Brimstone comes to the Zombie Survival Crew ready to do whatever is necessary to keep mankind safe from the undead hordes lurking in the future.