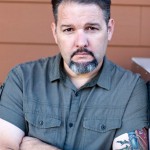 When things go bump in the night, Britt Griffith is there to investigate. As a star on SyFy’s hit shows, “Ghost Hunters” and “Ghost Hunters International,” he knows that there is something else out there. Britt possesses insight into things others cannot fathom, or want to admit could be real. That makes him a perfect fit on the Zombie Survival Crew’s command team. Aside from ghost hunting, he’s also an actor, appearing in Chillerama, Two de Force, and Azienda.

On occasions when Britt isn’t in front of cameras, or behind one with his production company, he travels the country visiting believers in the paranormal. He also keeps his ear to the ground, listening for the first signs that the Zombiepocalypse is upon us. Who better to recognize that something is wrong than an investigator of paranormal activity?