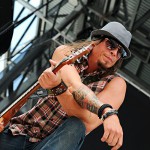 Paul Phillips boasts the role of lead guitarist in American rock band, Puddle of Mudd. Since helping found the band in 2001, Paul has recorded three albums with them and traveled the world, sharing his love of music with the masses. The fact that he doesn’t mind life on the road is a huge bonus. We may have a few ideas about that for Paul and his role in the Zombie Survival Crew.

When not on the road or in the studio with his band, Paul will be shoulder to shoulder with his fellow ZSC commanders, traveling where needed from an undisclosed location. We’re very happy to have such talent joining us.