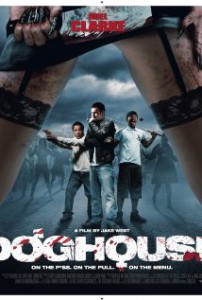 I hate when a piece of skin gets caught in my throat! What was I doing? Writing about Doghouse, right. This film came out a few years ago, back when I still breathed. (Really don’t want to go into those days…) Doghouse is focused on a group of guys looking to have a weekend away from the soul-sucking harpies they are dating, divorcing, or married to. I’m not being harsh; these chicks devour men’s spirits like I devour spleens.

The guys take off in a minibus in search of a small village where they hope to do manly things like drink, smoke, and golf. Not bad for a boy’s weekend, honestly. But none of them thought to call ahead and make sure the place hadn’t been taken over by a group of women, ones with an intense craving for male flesh. Whoops! Egg on their face.

You know, I almost miss eating eggs… Sorry. Skipped lunch, he was too fast.

Very quickly the band of macho men realize the village isn’t quite right. Matter of fact, there’s not a soul to be seen when they arrive. Intelligent people might have gotten back on the bus to find another place to party in, but not our group of unlikely heroes. They want to see this thing through to (their) end.

The first of the infected females we meet is a gorgeous blonde in a wedding dress. Too bad she’s married, I say. She’s quite a looker. As a matter of fact, most of the women in the village hold a certain appeal for me. Can’t put my finger on the reason why, though.

Watching the initial attack sequence (and all of the ones after) gave me the munchies. That alone is testament to the detail used in the gore, I’ll tell you. And, oh look. There is a man in fatigues pinned like a butterfly to a fence. Didn’t the folks at the Zombie Survival CrewTM warn about government involvement during the primary stages of the zombie outbreak? Glad no one listened to them.

The movie straddles the line between zombie flick and splat-stick and does it well. Zombies are depicted with intelligence, cunning, and just the right amount of puss. On the flipside, it was difficult to feel bad for some of the men trapped in the village given their total disregard for women. I mean, one resorted to rambling about necrophilia in order to cope with what happened to them. Even I was a little disturbed.

Overall, Doghouse is a very entertaining movie. Excellent performances from the core cast of men and the lead zombie-women. Next time I watch, I’ll be sure to have a snack handy. Preferably gagged so I don’t miss funny bits of dialog.