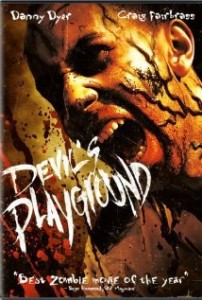 Very, very rarely does a film I’ve been asked to review surprise this cantankerous rotting corpse. The last few have been nightmares. Not because they were particularly terrifying, but because they weren’t all that good.

Devil’s Playground (2010) was a pleasant change from the current trend in extra-cheesy and poorly realized zombie films—even when, at times, it feels like a domesticated version of Resident Evil.

In an effort to find a safe life-enhancing drug, pharmaceutical company N-Gen accidentally infects all of its test subjects with a virus that mutates, turning them into ravenous beasts. The drugs affects transform all but one trial subject. A mercenary for the agency, Cole, is sent to find her. Along the way, he is infected and has roughly eighteen hours to track her down and bring her back before he becomes a zombie. Angie may be the only way to stop the zombies from taking over the UK one city at a time. That is if her friends, family, and fellow survivors allow her to do what is best for mankind.

There is the usual genre tropes tossed around in the movie. Utilizing the opening credits to run a series of vignettes that catches viewers up to the current time frame of the film is tired. However they shot it well enough that, even though it has been used to death, it didn’t bore me right away. The film also made ample use of television and radio clips to keep the characters and viewers in touch with what was happening away from what was on screen. It did get repetitive after a while, though. Oh and the flashbacks. Those were far overdone and, frankly, as useless as nipples on a male pig.

One other thing that comes back again and again is tied to the back-story between some of the lead characters. We get it; this guy is extremely jealous and protective of Angie. Beating that idea into viewers head will garner absolutely no sympathy for the character because by the time we’re supposed to feel that way, we just want him to shut up and quit getting in the way.

As far as the zombies themselves, the makeup isn’t the most detailed I’ve seen in a genre film, but it is somewhat unique. The zombies are revealed in stages, with the final stage being visibly gruesome without going too far into decay. It fits with the method of infection really well and doesn’t distract from how holy-hell-fast the infected are. Lace up your running shoes, folks, and pray these aren’t the zombies that take over during the Zombiepocalypse.

Overall, the film is grossly underrated. I’m giving it three-and-three-quarter mangled faces out of five—by far one of the better films to be slid under my cell door in over a year.