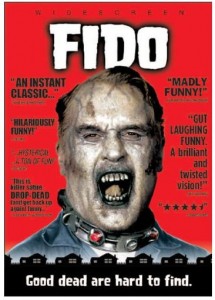 Just when I was certain that the ZSC commanders would allow me to rot in my cell, they slid a DVD case under my door. Will it never end? Some idiot once said that death brought around ultimate peace, like going to sleep for the rest of eternity. That idiot lied. But at least this time around, my captors weren’t too horrible about my review assignment.

In Fido (2006) filmmakers answer the burning question on everyone’s mind—Do 1950’s housewives need zombie pets? The answer is, of course, yes. What self-respecting zombie doesn’t want to belong to the cute mother next door? Sign me up for an afterlife of subjugation and humiliation.

Zombies in the movie are created by radiation from space. When anyone drops dead, they’re back on their feet in minutes as the undead. That kind of turn-around makes for business for Zomcom, a government-funded business dealing in zombie security issues. They are the ones that ensure the undead behave themselves by placing specialized collars around the zombie’s neck that curb their craving for flesh and then placing them in private homes or factories to work.

Weight Watchers has nothing on these guys.

The film is centered on Timmy and his pet zombie, Fido. There are the usual boy-and-his-dog sort of moments. The guys playing fetch, washing the father’s car, beating the snot out of a couple of snot-nosed bullies, etc. Oh and let’s not forget starting a zombie outbreak in the middle of town.

Fido doesn’t have the best zombie makeup effects I’ve seen on film, but they are far from the worst. What makes the movie is a smart script and actors that play it straight. That’s a pet peeve of mine, a hilarious script that’s butchered by actors trying to be funny. Just let it happen. That is exactly what they do here. With a few minor exceptions, like the neighbor with an unhealthy lust for his pet zombie. That one pushed it right up to the line.

I’m going to give Fido four dangling eyeballs out of five. It isn’t a huge-budget film, but that is part of the fun of it. Seeing what can be done with little funding and pure talent at the wheel. Pick this one up for your collection. What are you waiting for? And while you’re at it, someone bring me a snack—just an arm or something. I’m on a diet.