Unfortunately, the reality during an apocalyptic scenario is that most people will not make it far with their families intact—these folks tend to fall to the wayside on the show quite often. Some of them shuffled off the mortal plain with next to no one left to mourn their passing, even amongst their neighbors. One we wished had made it to the current time line completely stole the show for a too-brief time. Then there’s the one with so much potential, killed off before the writers would have to tackle any hard questions about women’s sexuality when it isn’t in a heterosexual relationship.

We’re taking a look back at season six’s dearly departed, and catching up with the actors who brought them to life. 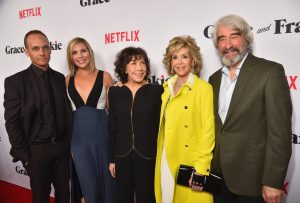 When you need to kill off someone, but make it seem impactful, you write the perfect jerk. Carter was season’s six’s sacrificial lamb—slaughtered by the group’s incompetence to make a point that Alexandria does indeed need Rick’s people to teach them the way, and that any who speak up against him will meet the wrath of God. Seriously, that’s how a lot of the deaths for season six felt, like the writers were over-reaching and showing their hand when they plucked problematic characters from Rick’s takeover path with little fallout for the hero. A shame, really. Ethan Embry, the man behind Carter’s short yet impactful time on TWD, could’ve brought a lot to the table acting-wise. He was perfect as a “friendly” antagonist, countering Rick’s attempt to steamroll into town and set up a military camp in what had been a peaceful settlement.

Post-TWD life has been pretty busy for Embry. He starred in The Devil’s Candy opposite Shiri Appleby and Pruitt Taylor Vince, along with Fashionista starring Amanda Fuller and Eric Balfour. Embry stars in Cheap Thrills, which is currently available to stream on Netflix. On January 13th, Amazon will release Sneaky Pete. The series was created by Bryan Cranston and David Shore (House), with stars Ethan Embry, Giovanni Ribisi, and Marin Ireland. Embry also plays Coyote Bergstein on Netflix’s hit comedy Grace and Frankie. The series stars Jane Fonda and Lily Tomlin. It has so much fan appeal, Netflix secured a third season before the second season aired. The third season will be released on the streaming service May 2017. 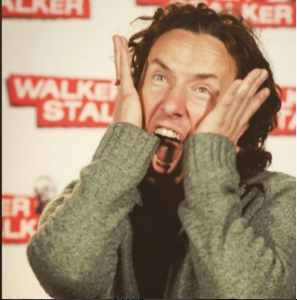 Nicholas never really endeared himself to anyone, let alone TWD fans, during his half-dozen appearances on the show. He, like Carter, were guys determined to keep things as they were before the prison refugees joined their community. After Glenn bruised his ego, he made it his life’s mission to eradicate the newcomers. In the end, Nicholas’ childish reaction to criticism killed numerous people, including himself. His final act, suicide, did have the unexpected bonus of saving Glenn. Guess Nicholas’ life wasn’t a complete waste.

Michael Traynor didn’t pull the long straw when it came to characters fans would clamor over for years to come. That being said, Traynor is such an awesome guy, they love him anyway. He can often be found living it up at various horror conventions throughout the United States, appearing alongside other TWD stars to meet their fans. Traynor went on to guest star on Freeform’s The Fosters for several episodes. Playing the father to a teenager possessed by an alien creature, Traynor appears in the upcoming sci-fi thriller Ascension alongside Christie Burke and Ana Mulvoy-Ten. He also stars in another thriller, this time with a horror twist, in Needlestick. In October 2016, Traynor appeared in the Youtube Red original thriller The Thinning. His next project is the ’80s drama Juke Box Hero, out later this month.

It’s no secret I loathe flashback episodes on TWD, but when they introduced Morgan’s personal savior, Eastman, it was worth the flashback trauma. He’s calm, collected, a pro with a staff, has a goat, and is obsessed with making the perfect cheese. Basically, this is the guy you want around when the crap hits the fan. Eastman’s story is far from cut and dry. Matter of fact, I constantly lament FTWD not existing as Eastman’s story instead of the lackluster plot they opted to follow. We didn’t get nearly enough time with a seriously complex character, nor did we get to fully enjoy the tension in his background which made him such an intriguing person. 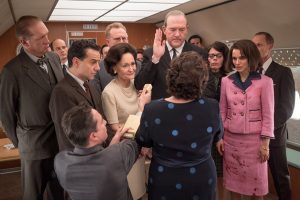 We also didn’t get enough time to bask in John Carroll Lynch’s brilliance. This guy has been on the genre fan’s favorite list for years, only adding to his status in our hearts with his TWD appearance. After, he returned to American Horror Story for AHS: Hotel, joining the weirdest dinner party ever as John Wayne Gacy. Lynch appeared as James Rivington on TURN: Washington’s Spies. Joining Jennifer Beals and Olivia Thiriby, the trio starred in the thriller White Orchid. Lynch also appeared alongside Matt Bomer and Maura Tierney in Anything. In December 2016, Jackie released with Natalie Portman in the title role and Lynch playing Lyndon B. Johnson. Later this month, the biopic The Founder releases, starring Lynch as Mac McDonald, along with Michael Keaton and Nick Offerman. SyFy’s creeptastic Channel Zero returns in 2017 for a second season, with Lynch coming onboard as John Sleator.

When the apocalypse happens, anyone with a trace of medical training will be king. Or in this case, queen. Denise didn’t start out her time in Alexandria as the community’s doctor. Thanks to Pete’s little self-destructive outburst, she was thrown into the position and forced to adapt or get people killed. As far as competency goes, she doesn’t do too horribly. As far as fair treatment from the writers? Not the same story. Denise suffers from the writers thinking they could handle two sets of gay characters. Aaron and his husband were established before Rick’s people got to town, leaving the romantic bits between the men sparse, without the passion from new lovers and rife with awkward moments where the writers flounder finding reasons for them to touch without it being “too much” for a predominately straight target audience. Conversely, Denise and Tara form a bond over their awkwardness within the show’s action. It morphs into a relationship which could have been refreshing, but never gets any time to develop—like the writers thought its mere existence was enough to convince viewers they were being inclusive and sensitive to gay viewers. It leaves us forced to believe two women in love can’t find enough time to be in a relationship, or even touch each other, if there’s anything else going on in their lives. Denise is another victim of the writer’s half-handed attempt to do something different, but when it proved too tricky (damn being sensitive to an already media-tormented people) they put her in Daryl’s story line to kill her. Sigh. 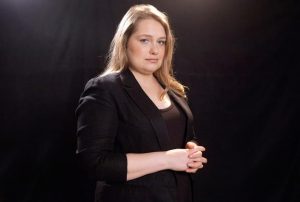 Not to fear, Merritt Wever isn’t gone from the airwaves for long. She’s laid low since saying goodbye to Denise in such a violent way, but is set to make a splash in her next project. Mever will appear as Mary Agnes in Netflix’s upcoming six-episode series Godless. The show is set in the American West during the 1880s, where a couple of warring outlaws find themselves in La Belle, New Mexico—a town completely devoid of men.