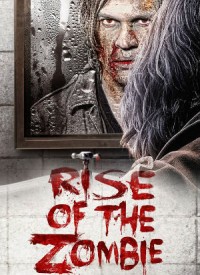 Let’s see what happens when someone takes a micro-budget film and does the genre justice, just for once. Please. My brain couldn’t take another poorly executed script. Luckily when deciding to take a chance on Rise of the Zombie, it didn’t end in utter disappointment. That’s not saying this is an insanely great film, but for what they accomplished, it’s not awful. It may even be—dare I say it? Re-watchable.

Relationships are difficult to maintain when Mother Nature calls to your soul, even more so when that love leads one to become a wildlife photographer. Neil Parker’s love life isn’t anywhere near as stunning as his work in the field. Matter of fact, it’s become extinct. Vinny Rao is tired of spending days, sometimes a week or two, wondering where Neil disappeared to this time. In typical Neil fashion, he makes an appearance at his buddy’s bachelor party right after the breakup and before his hangover’s played out, he is on his way to his favorite place out in the middle of nowhere. Does he tell anyone? There’s Thapa and a few others from the nearby village who bring him supplies when he doesn’t want to bike in, but no one from home has a clue. 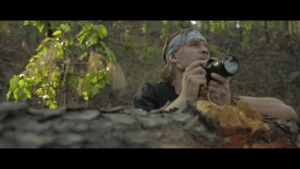 While on a hike, Neil is bitten by an aggressive bug. The wound festers, no matter how much he cleans it. Neil hallucinates, falls into a fugue state, and suffers intense nightmares. A few times he goes into town, inspired to reach out to Vinny, but she ghosts calls made from unknown numbers. The infection on Neil’s arm spreads. His lucid moments are fewer and fewer. A shift in his appetite leaves him scrounging for bugs. Unaware of any changes, the villagers invite him to party with them. He leaves with a woman at his side . . . then wakes with her bloody hand, only the bloody hand, in his tent. Neil’s appetite grows unchecked. Anytime someone comes to help him, he attacks. The nutrition gives him blessed few aware hours to try and reach Vinny, pushed by visions of their relationship.

Two weeks pass before Vinny realizes there’s actually something wrong this time. With the help of Anish, Neil’s soon-to-be-wed friend, and Dr. Dave Parker, his father, they eventually track down a phone Neil uses often in the village. Unfortunately, luck’s not on their side after that. 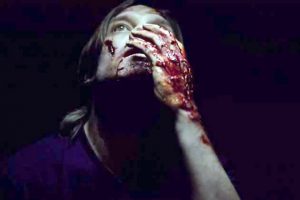 For the budget, this film is beautifully shot—with a few exceptions toward the end where the quality intentionally degrades to heighten the weight of Neil’s transformation. The overly-shaky attacks aren’t how I’d handle that transition, but it still works for this story. The opening sequence is mesmerizing, making the audience forget for quite some time that they’re watching a horror movie. They play a lot with the overall tone of the film. It’s very much a romance at the get-go with the gorgeous POV shots as Neil works, then shifting into the break-up scene after, followed by the raucous bachelor party. Even Neil’s decision to bolt to the middle of nowhere fits a romance outline. Everything changes after the bug bite. Gone are the crisp landscape shots. The world is unfocused. Neil’s attention shifts down, down, down as his appetites change, taking the camera with it. It’s rare to see this much attention in a genre film this size.

The use of quiet time in the script is probably what saved the film from being tedious. Neil is alone a lot. When he is around people, the discussion is all mundane because there is no mass outbreak. Neil’s the sole threat to the villagers and up until the end, he has no clue just how dangerous he is to those around him. The heavy lifting on the speaking end is left to Vinny and the others in Mumbai. They’re always pushing the urgency to find Neil, though we know he’s too gone to care. Where everything, unfortunately, falls apart is the final act. The resolution isn’t satisfying because there’s no resolution. Vinny makes it to the village and it more or less ends there. Five more minutes of story to wrap it up wouldn’t have hurt. 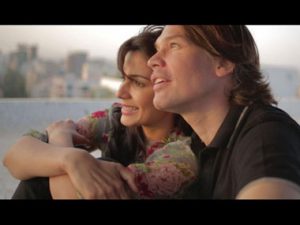 Special effects and makeup are the weakest link in this movie. Neil’s wounds are simplistic and don’t stand up to close-ups. There’s a moment where he angrily rakes the flesh off his arm, except the makeup is obviously nothing more than greasepaint over liquid latex so it’s not graphic, as intended, but more like we’re watching the actor clean up at the end of the shooting day.

Where the makeup falls short, the actors pick up the slack. Kenny does a bang-up job bringing a unique physical presence to Neil’s transformation. When he plays through the lucid moments, it’s gut-wrenching. Honestly, this single performance makes the film worth at least one watch. He’s bringing a lot to the table in a film most people won’t give the time of day, which is a disservice to oneself as a genre fan, honestly. Cringe through the makeup and watch Kenny deliver a zombie acting class. Seriously.

There’s a lot which could’ve made Rise of the Zombie a higher quality genre offering. However, for the budget, they managed to deliver a better movie than domestic releases with the same kind of money. I’m giving this film three disemboweled torsos out of five.