Review of The Walking Dead episode 305 “Say the Word” 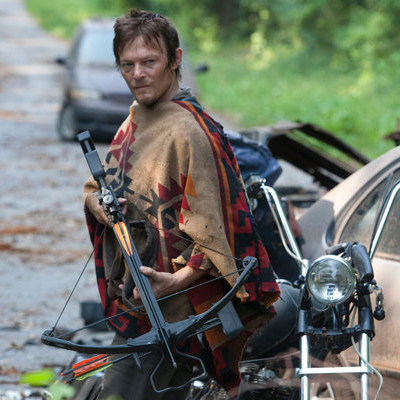 Be honest, how many of our brave Zombie Survival Crew brigadiers tuned into the newest episode of The Walking Dead and sent up a wish similar to this? “Please don’t kill off anyone I love on the show this week.” Oddly enough, that has been the mantra in the ZSC Command Center since last season. Yet, we keep coming back to see what our favorite group of Zombiepocalypse survivors is doing, no matter how heart breaking it gets.

Does this sort of behavior ring a bell with anyone else?

Speaking of familiar things, who else yelled after seeing captive walkers (or biters) in Woodbury? Yes, that always works so well. Ask Hershel and his family if it is a good idea to pen up a bunch of zombies and feed them like livestock. Oh wait, you can’t ask part of his family because they were eaten. Not by the captive zombies, true, but the sentiment is the same. They are dangerous, even with “modifications”. It hardly surprised me to see what the Governor had planned for the walkers in his care—even though it gave Merle a chance to show off his fighting skills. Who needs two hands to be a hardcore killer? Not that guy! Merle is the star of Woodbury’s twisted professional wrestling company. It fits too well.

The more we see of the Governor, the harder it is to stomach his interactions with Andrea. It took her seeing the seriously extreme lengths he goes to in order to entertain the people in his city for the first real thread of doubt to creep into her mind. She’s forsaken Michonne’s advice, pushed away the only person who really, truly had her back. What are the Governor’s intentions with Andrea? He’s not as obvious as Merle. Nor is he as loyal as Michonne when it comes to watching someone’s back. We can’t believe he wants a romantic relationship with her…can we? Fish tanks, guys. Fish. Tanks. Andrea could very easily end up in the Governor’s screwed-up man cave if she isn’t careful.

Grief is a very, very solitary thing. It stuffs your head with so many emotions; it is like having a brain transplant with a tub of cotton balls. You can’t see past it. You can’t acknowledge the pain others are in from their grief. All you feel is the hole in your chest getting bigger and bigger until it feels as though a truck could drive through it and not touch the sides. That is where Rick is. He can’t comfort his son—the son who was forced to “put down” his mother in order to save her from a more horrific existence than they were already living in. Rick hasn’t even acknowledged his newborn daughter. The only thing separating him from the things he’s killing is a heartbeat and if he keeps going down the path he is on, he will join Lori in the gut of a walker.

While Rick is isolated from the rest of the group—a group he swore he’d lead and protect with everything he had—there are still problems that need addressing. Daryl stepped up to the plate without so much as a second thought. He leapt into action to make sure they had everything they needed to care for the baby, with Maggie helping. Heck, Daryl even killed dinner during their trip out for supplies. How’s that for multitasking?

There’s been talk about who would make a better leader, Daryl or Rick. Rick is a great leader normally. He is a quick thinker. Is trained in paramilitary techniques. His heart is large enough to encompass everyone he deems as part of his crew and once they make it into his heart, he would die to protect them. However, Rick is fragile. He’s been run through the ringer since day one when he woke in the hospital. It was only a matter of time before something happened and he snapped a cog. Daryl, on the other hand, is usually very mellow. He stands back from the problem and assesses it, not with book smarts or anything someone else taught him, but with the skills and knowledge he gathered himself. Daryl was raised to be a survivor. It was the only way to make it through his rough childhood in one piece. His fault lies in the fact that he can’t, he won’t hold your hand and talk through your emotional breakdown. Daryl is a man of action, not emotion. Though, once he’s gotten comfortable around someone, he begins to take care of them in subtle ways, ways that doesn’t look like he cares too much, even if he does.

What about Carol? We never saw her body. A glimmer of hope shines in the darkness covering the group. Hopefully there are some answers next week and this isn’t drawn out like the search for Sophia.

Who would you rather follow into battle with the undead, Rick or Daryl? Let us know in the comments below.