We are back for another installment of myth bashing with your Zombie Survival Crew commanders. This series strives to separate fact from fiction so that you all have a snowball’s chance in Hades of surviving the Zombiepocalypse. 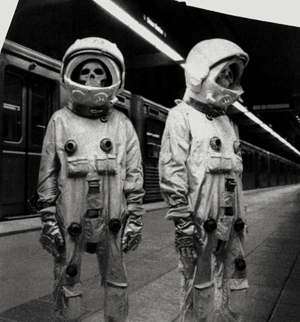 Myth: Save the space program! We can use the space shuttles to haul all of the zombies out into space and watch them blow up.

Fact: You’ve been watching one too many Sci-Fi movies.

A few facts about space: First, space is a vacuum. It is devoid of air pressure. In contrast, Earth has approximately fourteen pounds of pressure weighing us down. To counteract, our bodies push back against this pressure with equal force. When exposed to a vacuum, the pressure inside the human body doesn’t magically turn off to balance things out. Instead the unchecked pressure builds, creating tiny gas bubbles in bodily fluids that expand, testing the elasticity of human skin and the capacity of our chest/stomach cavity. (Imagine a marshmallow in the microwave here.) It doesn’t take very long for swelling from the gasses to cut off blood and oxygen, leading to brain death.

Got all of that? Good.

Now we need to look at physical characteristics of a zombie. They don’t breathe, so they wouldn’t asphyxiate when dumped into space, which is what generally kills humans first. Almost all zombies have wounds deep enough to pierce the dermis, if not rupture the body cavity, so in theory it would take longer for the pressure to build in a reasonably fresh body. (I say in theory because, lets be honest, it would take years of studying to know all the facts on this stuff.) But once the pressure did build, brain damage would be severe enough to dispatch the zombie permanently. That and they’d be a deadcicle from the water vaporizing out of their body and freezing as gasses expand.

“What if space aliens find the zombies?”

As I’ve stated, the undead would be frozen. Freezing does preserve certain bacteria, but it could also destroy the microbes. It is impossible for us to know if the temperature would drop low enough to destroy whatever it is that reanimates the corpses. Barring any cellular changes from the radiation found naturally in space, it could be possible if an alien species found the Earth’s dirty laundry floating in space for them to be exposed to it once the zombies defrost.

That doesn’t mean there would be alien zombies navigating through space, though. If the species is, say, reptilian in nature, they likely won’t have enough in common genetically for the zombie virus to jump over to them. That isn’t to say that they wouldn’t be infected by it. It just wouldn’t affect them as it affects humans. The virus may even begin to mutate through the generations to eventually turn this alien species into zombies. That would be far off from the discovery of Earth’s undead, however.

(Of course, seeing as we have no proof of alien species existing, that whole explanation was simply to appease Sci-Fi fanboys. We live to serve.)