Without having to steal, I mean, borrow LK’s flux capacitor, I took a trip back in time to better understand the origin of the weapons we’ve been encouraging you all to use in the event of the Zombiepocalypse. It was no small feat to travel back in time, either. I had to ride for an entire hour in an air-conditioned SUV to get there. What? It was a long hour, dangit!

Much like Juliette’s trip to the Dagorhir event, I made my way to the 22nd annual Tulare County Renaissance Faire in hopes of not only finding information on weaponry, but also recruit a few folks ready and able to survive a zombie attack. And boy oh boy did I find what I was looking for. Most of them were right there fighting on the battlefield, proving they knew how to handle a weapon. It was an impressive sight. I began to mentally picture the opposing army as zombies, though. The sun may have gotten to me a bit. 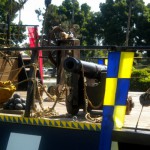 Let us tackle the big boys first, the cannons. For reenactment purposes the cannons at renaissance faires are not loaded. They do, however, actually use black powder. If you haven’t smelled black powder after its been ignited, it kinda smells like Lucifer himself his walking the battlefield, very sulfurous. Cannons are not very accurate. They do work well at whittling down armies to give foot soldiers a fighting chance and would cut down, say, a horde of zombies shambling across the field. A modern counterpart to the cannon has better aim and does more overall damage. The downfall is a lack of mobility unless the device is mounted on a vehicle. 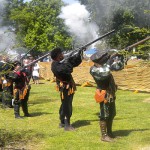 For more mobile firepower, the Italian troops on the battlefield used matchlock muskets. As far as older guns go, the matchlock musket had the best firing mechanism was used everywhere and for a pretty long time. The downfall to the matchlock musket was that they take a long time to load. Often musketeers would be put into formations, giving them two to eight lines of men. The first line fired, moved to the back, and reloaded. Each subsequent line after would do the same. It worked well enough to take out armored soldiers on the opposite side, but like cannons there was no accuracy. For our purposes the load time on the musket would label someone “lunch”. But, modern guns are far more reliable and easier to use and reload. Remember, the ZSC’s number one weapon for the Zombiepocalypse is a rifle for a dang good reason. 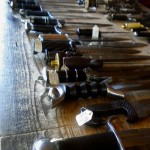 Nothing gets me as jazzed about a fight as hearing the ringing clang of steel against steel. So, is it really that surprising that I’d mention swords in this? The Tudor era saw a few styles of sword blade. Thinner swords, designed to slip between joints in plate armor and pierce important parts of your opponent, were very useful as soldiers began to better resemble cans of tuna. Wide-bladed broadswords, as used in the battle I witnessed, were weighted to do the most amount of bludgeoning damage as they could. Fighters knocked their opponent senseless and used the slashing edge to cut up the other man. Lack of medical attention was usually what killed their opponent in the long run unless they got a clear deathblow in. Gangrene isn’t pretty. I’d rather take a sword to the head. 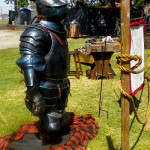 Speaking of oversized cans of tuna… There are a few layers to a full set of armor. First, clothes (don’t roll your eyes, this is an educational piece). On top of the clothes sits a chain mail shirt made of rings that have been riveted together. Chain mail makes it harder to pierce between the joints of the armor, but not impossible with the proper weapon. The suit of armor came last. The various pieces of the upper body all strapped together with leather belting. Leg armor wrapped around the soldier’s leg, held in place by more leather strapping and left a huge vulnerable spot if he were attacked from the rear. While a full set of armor weights upwards of 45 pounds, soldiers remain surprisingly agile. I’ve seen some of them doing somersaults on the battlefield with no problems whatsoever. The downfall of plate armor was that it provided little protection against bullets and arrows, a problem modern armor is designed specifically to protect again. However, with the exception of the exposed sections of leg, plate armor would be more effective to keep the undead from sinking their teeth into you.

Going back in time via a renaissance faire is an excellent way to learn more about the origins of the weaponry you all will be expected to use when the dead decide they’ve got a mad case of the munchies. Study up. And if you can, visit a local faire. The men and women there can tell you a lot, not only about weapons, but about how to survive in times without cell phones and computers.