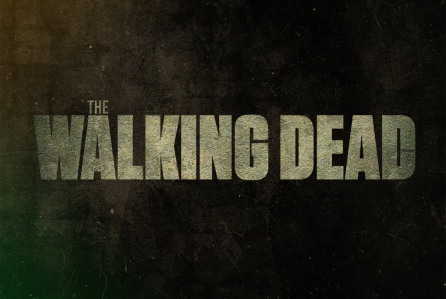 The Other Side:
Review for The Walking Dead 714
by R.C. Murphy

There’s absolutely no sense of urgency going into the final two episodes for season seven. Sure, every character on-screen is doing something to prepare for this upcoming war, but they’re going about it in such bone-headed ways, there’s no enjoyment, just grim knowledge that the writers will kill off more characters after a flimsy attempt to make them loveable. 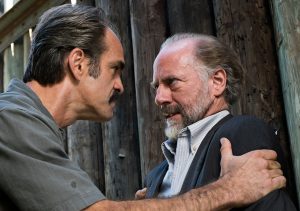 The Saviors roll into Hilltop on a mission to ferret out Daryl. It’s the prefect chance for Gregory to polish his reputation. In Simon’s opinion, the push-over leader might as well be the talking Welcome Mat from the Beast’s castle—sentient enough to be useful, but unable to enact any real change on his own. In a rush to save his skin, Gregory licks Simon’s boot with flattering talk about booze—men are so damn weird—and finally launches a desperate bout of word-vomit alluding to another party vying for power in the village. For his effort, and for graciously allowing Dr. Carson to become Negan’s personal physician, Simon invites Gregory to his place for drinks and a discussion about the power struggle. Who does Gregory see at a threat this time around? Not Maggie, who he’s fashioned into his own personal demon since her arrival. No, Gregory makes a 180-turn, focusing his paranoia on Jesus . . . in the same episode where we finally learn what lies behind the long-haired man of mystery. Chew on that for a while. Guess misogyny wasn’t enough of a shield for Gregory, they had to make him a bigot, as well. Can we just stop putting men like this on television? It’s no longer cathartic to see them attacked by the undead, or however they wind up dying, but instead reaffirms the notion that no matter how bad a person you are, in the apocalypse you can still get ahead by hating everyone who’s different. Want to smash the patriarchy with your art, TWD writers? Start by denying them someone to identify with and see how they like the turnabout. 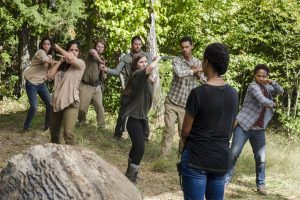 With the Saviors in town, Maggie and Daryl are finally forced to deal with each other when they take cover in a basement together. Was it the long-awaited verbal smackdown from a grieving widow? NO. And that’s a damn shame. Maggie is very forceful in the way she forgives the man directly responsible for her greatest loss to date, going from back-patting to straight up cheer squad for Daryl’s ego. The moment isn’t a sweet reconciliation. It’s downright infuriating to watch Daryl escape consequences for his childish behavior yet again. I mean, not only did his punch get Glenn killed, but he’s gone on to mope about it like a teenager denied the car for an evening joyride. Yes, I heard his apology. It’s empty. He is forced to apologize because he’s stuck in Maggie’s presence and afraid she’ll lay into him before he can slap a Dollar Store bandage on the problem. His apology is a reflex, bred from years of verbal abuse in his family, but it’s not a sign he’s learned a lesson. Maggie forgives him so the fan-favorite character isn’t in the dog house anymore. That’s the only motivation behind what should’ve been a powerful confrontation scene. Instead it teaches that empty apologies are currency to cover the cost of assisting in a murder. Whoops! Sorry your lover died. Wanna go shoot arrows together?

Give me a break from all this man-appeasing bull.

Okay, but I didn’t mean you should produce what’s probably the worst girlfriends road trip in the history of mankind, TWD folks. 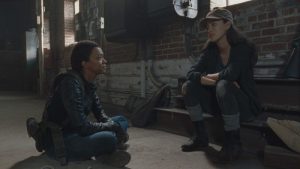 Rosita and Sasha are forced to deal with each other yet again. Guys, this entire story line is just daft, let’s get that out of the way. No woman is going to buddy up with her dead lover’s ex to go shopping, let alone assassinate someone. Why put oneself in a position to be verbally or physically attacked by someone who obviously holds a grudge? Drama doesn’t make women’s hearts beat. Sasha’s finally achieved the good life. She just has to wait for the right moment to lead, or help lead, Hilltop. Instead, her mental progress is dust-binned in favor of a fruitless assassination plot. Rosita, for her part, does her best to screw up. Even when she opens up emotionally, it’s to admit she’s spent years using men with no intention to make a future with them, nor explain why she left. For the record, that’s not how feminism works, so let’s not make Rosita into some fort of feminist figurehead. She’s just a cruddy person who, instead of asking to learn a skill, she shadows lovers, takes what information she wants, and is gone not long after. No matter your gender, that’s awful behavior.

Two episodes left in the season and nearly an entire episode is devoted to developing secondary characters who’ve been neglected—except Sasha, who’s regressed to where she was mentally after Tyreese died. The writers use an entire episode for an info dump. Good writers spread information throughout the piece. They don’t stop in the middle of the arming-up scene and waste an entire chapter to delve into why a character has mired in two-dimensional Angerland for years, or to give a free pass for bad behavior because Tragic Backstory is a magical cure-all. It’s not. It’s cliché, lazy writing. Seven years down the line, these people are so far removed from the world, they no longer understand how to use fan’s emotions to pace the story’s flow. We should be desperate to know what happens next week. I watched one preview, shrugged, and assumed the next two episodes will be over-filled with action stemming from Rick’s rash decisions, with the season finale ending on a cliffhanger. I highly doubt the war is here yet. There hasn’t been enough tension to warrant a conflict of that magnitude, not with the side trips to frolic at the county fair and all the time it takes to don kid gloves for handling Daryl’s ego. Maybe next year we’ll finally get there. Have hope. We’ll get that war, guys.