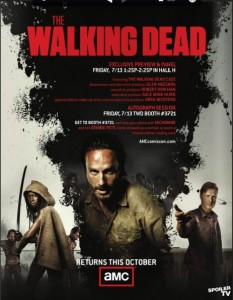 On the weekend after the Fourth of July, AMC ran a two-day marathon of The Walking Dead, starting with season one and going all the way through season two. The marathon was capped off by a live one-hour edition of Talking Dead, hosted by uber geek, Chris Hardwick. He interviewed cast and crew from TWD while they were out in Atlanta, Georgia filming season three.

Executive producers Glenn Mazzara and Gale Anne Hurd were the first TWD guests. Along with Drew Carey, who is a huge fan of the show and very into survival stuff. (Hey, Juliette, I think we need to go on a new mission for the ZSC…)

Glenn stated that the “Ricktatorship”, which we saw at the end of season two, is just beginning. It won’t be an easy road for Rick. He’s lost his best friend and second in command. His people are tired. Their loyalties are torn after discovering he kept a huge secret from them since leaving the CDC. He has to push the group to keep going, but if he pushes too far, he’ll lose them. The big question is, how will he deal with not having Shane around? Can Daryl step into that position and help out?

Gale adds in that Rick’s personal life isn’t peachy keen at the moment. Lori thought that Shane would be her savior, that he could be a father to Carl. A father that’d stay put because Rick is too keen to run off and save the world. She’s very much feeling Shane’s blood on her hands after pushing Rick to take care of things. But worst of all, she’s completely torn up over Carl’s involvement in the whole ordeal.

For the first time, they’ve announced ahead of time what the interactive fan treat for San Diego Comic-Con will be. Greg Nicotero, co-executive producer and SFX makeup wizard, walked us through the process of recreating Michonne and her pet zombies. They did lifecasts of Danai Gurira and the one of the walkers. Actual wardrobe pieces from the set will be worn by the statues to achieve a very unique interactive experience. Fans of the show that attend SDCC will be able to strap on a collar and take the place of Michonne’s second walker.

Laurie Holden, who plays Andrea, said that her time with Michonne will be spent kicking zombie butt and taking names. She forms a friendship with the other woman after being saved from the horde out in the forest at the end of season two. Laurie went on to talk about David Morrissey, who will play the Governor, saying he is perfect for the role—sexy, charismatic, evil, yet very sweet when not in character.

Glen Mazzara added that the Governor “is a guy that thinks the zombie apocalypse is all about him.” He fully believes that people will look back at this point in history and see him as the light that kept humanity going. The Governor thinks he is the messiah and will do anything to prolong the existence of humans.

Chandler Riggs called in to the show and was very adamant that Carl would not be going into the house any more. He is growing up. Carl wants to pull his weight. He feels it is his responsibility to be a soldier, to protect the group. His experience with Shane is taking him a little towards the dark side. Not quite sure what that means, but it will be interesting to see how being surrounded by death affects a child of that age.

Steven Yeun took Chris Hardwick through a tour of the prison set. Everything was built specifically for the show. It’s all fake, but looks so incredibly real because of the great attention to detail. The prison is dirty, dank, and uncomfortable. The actors aren’t being spoiled between shots, either. They get dirt caught in their throat. It coats their sinuses. All in all, the set makes for very true performances from everyone.

Executive producers David Alpert and Robert Kirkman came on and teased fans mercilessly. It was hard to tell what information they gave was for giggles and what fans can look forward to. David admitted that there will be a lot of death in season three—zombie deaths, human deaths, the deaths of characters we love. Basically he warned fans to watch the next season with a box of tissues in hand.

They confirmed, for the umpteenth time, that Merle Dixon will indeed be back for season three of TWD. Merle is a character that you never know what to expect from him—other than racism and hatred. Maybe this season Merle will adopt a stray kitten or something likewise fluffy and cute to redeem himself.

In other Dixon news, it was announced that in 2013, Activision will release a first-person-shooter The Walking Dead video game. The game will allow players to go through the first stages of the zombie apocalypse as Daryl Dixon, with his brother Merle at his side.

We will have more information about season three of The Walking Dead after San Diego Comic-Con.