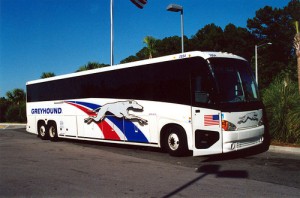 As I was sitting in the Phoenix bus terminal during my trip to Dallas Comic Con, I began to realize something was… off.

My trip began right on the heels of the CDC releasing their Zombie Apocalypse survival guide on their blog. Little did I know exactly how influential this thing would be. Every single TV I passed from my home base to Dallas covered the CDC’s guide. People on the bus, once they saw my zombie-centric handbag, began grilling me about it. And after I told them about the ZSC? Forget about it. I spent nearly 2 days solid neck deep in zombie talk.

About 12 hours into the trip, I began to observe my traveling companions. It was a huge risk exposing myself as a commander with the Zombie Survival Crew in a situation where I could not escape anyone that turned on me. There were some folks that made me wish I had my sword on the bus. They shuffled around with no apparent destination. Their eyes were glassy, blank. No one home in there. And, ugh, they reeked. I’ve been lucky enough to never catch a whiff of the unholy B.O. of a walker, but I’m sure this had to be it.

So there I was, sitting in a bus terminal waiting while the bus gassed up… surrounded by potential zombies.

The thought forced me to take in our surroundings. How secure is a bus terminal? About as secure as a cereal box. There are more doors and windows in a typical station than solid walls. Survivors would eat up all their wood resources covering access points, leaving nothing to burn on cold nights or to cook with. On top of that, they layout itself is far too open. If a firefight were to break out, I’d have a deli counter or one of three concrete pillars to hide behind. Food supplies are laughable. Sure, most stations have a restaurant, but its all frozen food stuffs. Once the power goes out, that food will not last long. Nor will it tide over the size of crowd that could be trapped inside. 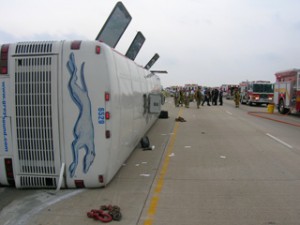 And gods forbid if the Zombiepocalypse should happen while we’re on the road. We’d become a veritable moveable feast! There is no storage for food. Space on a bus is non-existent, almost laughable. Sure, the bus can outrun a horde of zombies looking for a midnight snack, but eventually it’d run out of gas. A Greyhound bus isn’t exactly Dead Reckoning (Land of the Dead 2005). Once it is out of gas, the one secure element is gone and zombies have a huge can of human sardines to dig into.

Sleep deprivation is a huge problem associated with traveling by bus. At one point I was so out of it I swear I saw a demon crawl out of a box strapped on the back of a semi-truck and into the cab to attack the driver. A hallucination like that, even in someone like myself that is highly trained to handle the unknown, is really dangerous. The lack of sleep also made me really chatty.

It wasn’t until after I’d missed one night of sleep that people started to get awfully chatty with me on the bus. Some of the passengers got on at my home base. Those were the very same to begin questioning me about why I was on a mission to Dallas, TX. The connection never made sense until now. My travel itinerary was compromised, information had to of been given to our enemies.

There is a mole within our ranks.