Warning Signs:
Review for The Walking Dead 903
by R.C. Murphy

Yup. You guessed it. There’s spoilers in this review.

Rick’s little experiment crumbles around him, yet he still somehow holds out hope that everyone can and will live together. Like one speech from only one community leader absolving murderers and thieves of their sins is enough to make their victims magically forgive. It’s painfully obvious that others in power positions do not agree with Rick. Matter of fact, the only ones on his side by the end of the episode are Carol and presumably Ezekiel. But even Carol has her doubts about letting the former Saviors into their trust bubble. She takes them case by case, but the others don’t have the luxury of being able to compartmentalize thoughts and emotions with Carol’s skill long enough to work past the knee-jerk, “these are bad people,” reaction. Rick wants so badly for the Saviors to be redeemed in the eyes of society. Why? Why risk everything for these people? Because he is those people. Rick has seen and done just as many awful things. In another person’s narrative, Rick is a power-hungry monster who has left nothing but destroyed communities in his wake. Maggie and Daryl’s decision during this episode’s climax will send Rick into a spiral where he’s forced to assess his sins. 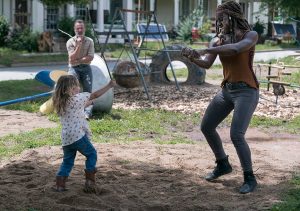 In order to put that self-assessment off for as long as possible, Rick takes to lollygagging around Alexandria. Well, after he and Michonne finish “discussing” the idea of having a baby together. He makes a doctor’s appointment for Judith, takes his favorite ladies out for a picnic, and goofs off instead of returning to the bridge worksite. In typical TWD fashion, they’re making Rick as happy as possible before yanking the rug out from under the character. It’s quite a task, keeping Rick happy. And it never lasts for long. 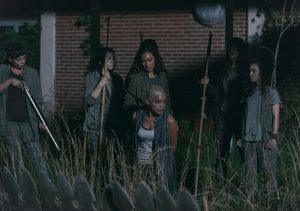 The assassinations send the former Saviors into a panic. As a group, they’ve been banned from carrying firearms, putting them at a distinct disadvantage against a serial killer using something similar to a crossbow. Cooperation between communities fails completely. By episode’s end, Sanctuary’s citizens walk out en masse, citing fear for their safety as their main concern. They’re right to be afraid, but are too late to save those with the largest targets on their heads. Those Oceanside ladies sure did work a great con, by the way. They were way, way down on my suspect list, though it is not out of character for that particular group to look at how Maggie solved her problem and emulate it. Can Maggie take them at their word now? Was Arat the final name on their revenge list or will they somehow remember another Savior who wronged them and start the cycle again? I’ve no doubt that this is not the last death of this nature. I do doubt that Maggie will get her revenge as easily as she seems to think it’ll happen.

At this rate Michonne won’t ever get a chance to pass her new laws, what with everyone running around playing assassin and all. 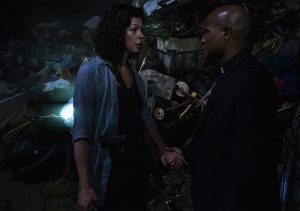 One subplot finally getting some traction is Anne and the mysterious helicopter. Spooked by accusations of being the serial killer, Anne returns to her old home to recover a walkie talkie linked to whoever operates said helicopter. The conversation the two have is in code, but the meaning is clear. In order for the mystery man to follow through with their plan, she has to make some form of payment. A human payment. Love-distracted Gabriel falls right into the trap by failing to agree to run off with Anne to a newer, better place. Either she’s going to ditch him and find other payment, or hand him over to the mystery man.

Peace has already reached its limits and Rick hasn’t made nearly as much progress as he wanted. Pushing society to development faster than it can handle keeps backfiring. Yet he drives on like there’s a fever burning his veins and the only cure is everyone living in perfect harmony. Sure, he says he’s bettering the world for everyone, and in Carl’s honor, but his decisions come from deeply selfish roots. That alone is why the wheels will totally come off Rick’s wagon over the next few weeks.