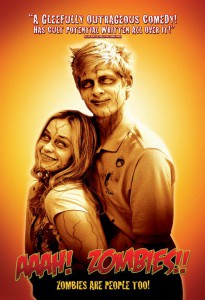 I’ll admit, I went into this movie fully expecting the name to be the most entertaining part. Aaah! Zombies!! (2007) was originally released under the name Wasting Away and usually when a movie goes from a darn good name to a slapstick one, it bodes ill. Not the case here, folks.

This film makes no bones about it, from the get go you realize it is going to be campy. Campy and well acted. The opening sequence is straight out of a 1950’s era nightmare: Government doctors practicing potentially dangerous experiments on soldiers and all with a catchy tune to liven everything up while things get good and undead. Because of how well this sequence works, I didn’t mind in the least that the footage was in black and white (with select colorization). It just seemed to… work.

I’ve got to hand it to the filmmakers (not an actual hand. I lost one of mine months ago…) they made some very, very smart decisions. One of them being highlighting the way the zombies perceive the world by putting everything in color. It is such a vast difference that you sit up and take notice the first time it happens. Shifting between color and black/white also leads to some comical moments when we’re bounced back and forth between points of view.

Another moment of brilliance, albeit immature brilliance, is the string of disgusting food jokes throughout the flick. Yeah, I know its stupid for a zombie to get grossed out by food jokes, but there were a few stomach-churning concoctions devoured that forced me to look away for a moment, and not to grab a snack, either. Nacho cheese and chocolate? Puke me a river.

There was a moment while watching that I forgot to take notes. (Yes, even zombies need notes to write reviews off of.) My last coherent note is, have the duct tape handy. Aaah! Zombies!! will make you split your sides open laughing, and that is the best part. Hardcore zombie movies are all well and good, but sometimes we need to sit down and simply laugh. This is the film to get your laughs with. I give this movie a shiny gold brain sticker.