Review of The Walking Dead 307 “When The Dead Come Knocking”
reviewer: RC Murphy 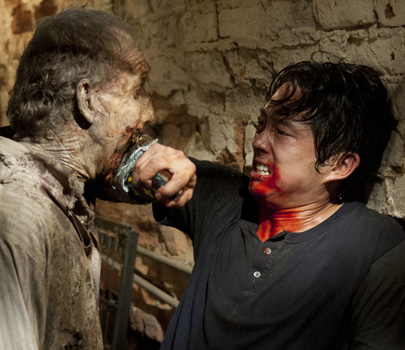 We’re one episode closer to the dreaded, the unthinkable, the torturous mid-season finale of The Walking Dead season three. Everything so far has been building to the confrontation between Team Prison and Team Woodbury. Which side are you on? Let’s take a look at each team and their actions in episode 307. Maybe that’ll help you make your decision.

Team Prison has gained a very strong ally in Michonne. That is, if Rick decides he can trust her. It honestly looked as though he wanted to leave her standing in the middle of a field of walkers. Not to mention bearing witness to how easily she disposes of the living that prevent her from continuing in her relentless drive to survive the apocalypse. Rick’s distrust of strangers is at an all-time high. That the two prisoners, Oscar and Axel, made it into the “inner sanctum” of the crew’s trust is astounding. So many strangers have attempted to harm the group; Rick has developed serious trust issues. Most of those may actually stem from Lori and Shane working inside the camp to hurt him, even though they thought they were doing it for Rick and the group’s benefit. Look where that got them.

Once Rick watched Michonne work with her sword, he saw potential and stepped in to help her. However, Rick wasn’t the savior of the day.

It was a bullet from Carl’s gun that took out the walker inches from ripping into Michonne. He didn’t hesitate. He lined up a clear shot and took it. Carl has nothing to prove at this point. It was his gun tasked to put his own mother down after her emergency c-section. After, a coldness crept into Carl. He’s been different, slightly distant, but nowhere near as isolated by his grief as his father. Rick took a while to work out his grief, to the point where we didn’t know if he’d come back to the group in one piece. During that time, Carl helped clear the prison of lingering walkers and took care of his newborn sister. Heck, he even named the baby—Judith. At some point, Carl tasked himself with being the man of the family. And you know what? It is a role he fits into well. Carl has done a lot of growing up since season one, back when he wouldn’t still for a haircut and went off with Shane to catch frogs. He’s matured enough to be in charge of the prison while the others are off to Woodbury on a mission to rescue Glenn and Maggie.

Merle, Merle, Merle…you are a tiger, fully incapable of changing your stripes, no matter how hard you try. We are finally seeing the old Merle, the one Rick and the others left handcuffed on the rooftop. He is a master at warping the truth to suit his needs. In his world, he needs to be the perpetual victim. He uses the pity his twisted stories garners to sucker people into trusting him. His attempt to do the same with Glenn fails miserably. Glenn will not give up the location of the others. Why does Merle want to get to Daryl so bad? He doesn’t strike me as a sentimental man. He was the one who left Daryl to fend for himself for most of his childhood. Caring now raises too many questions. Namely, is he trying to recruit Daryl to the Governor’s army? The Governor seems concerned that once Merle sees his brother, he’ll switch sides. Guess we’ll find out soon, huh?

Andrea thinks she has seen the darker side of Woodbury and the Governor, Phillip, after the undead WWE match from before and the scientific endeavors in this episode. She couldn’t be more wrong. He used the experiment with the dying man to keep her out of the way so she wouldn’t find out about Glenn and Maggie. Was it overly important? No. She knew full well what would happen once the subject was reanimated. Any of the other soldiers could have stood by and dispatched the biter just as easily. It is the same thing Phillip has been doing with her all along—keep Andrea distracted and complacent. How will her opinion of him change once Team Prison comes into Woodbury? Will Andrea jump ship and go with Michonne and Rick? She trusted both of them at one point. Throwing her lot in with a guy who lies as well as he breaths is seriously stupid.

The Tough Guy of the Week Award goes to: Glenn. Obviously.

Glenn remained utterly calm in the face of Merle’s storm. Somehow he managed not to die (with a few too many close calls for Team Glenn to be comfortable, to be honest). And despite the condition he was in, he wasn’t the one to break. His faith in Rick kept him rock solid through the interrogation. Hopefully that faith is founded.

Next week is the mid-season finale. What do you hope will happen when Team Prison and Team Woodbury clash at last? Let us know in the comments.