Who Are You Now?:
Review for The Walking Dead 906
by R.C. Murphy

Don’t leap ahead without knowing there’s episode spoilers in this review. There. You’ve been warned.

Let’s do the time warp again! Usually when the production team introduces a time jump of any significant period, the fans wind up feeling a tad cheated. For instance, we missed Hershel being born thanks to the last time jump, and that’s really something that should have been celebrated given how poorly the pregnancy was handled in the first place. But for this particular skip in time, we’re brought in at a pretty good place. Not to mention the new additions to the cast, who are knocking it out of the park from the get-go. Cailey Fleming, playing an older Judith Grimes, is a scene stealer, for sure. I sincerely hope she gets to hang around for quite some time. Her exuberance is a breath of fresh air for a show that was getting old and stale. 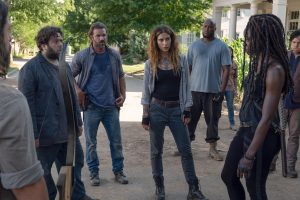 Speaking of newcomers, there’s a new survivor group in Alexandria. Meet Magna, Yumiko, Luke, Connie, and Kelly. Judith saved their bacon at the end of the previous episode and continues to do so now. She’s the one to finally put her foot down to get Magna and her people, particularly the injured Yumiko, somewhere safe. Watching a group of adults constantly one-upped on the humanity charts by a child is something to behold, and Judith does it quite often. She even gets a dig in on Negan when he smarts off while helping with her math homework. Her strong spirit moves only so many people. Michonne isn’t as easily swayed by her daughter’s iron will. Matter of fact, she’s pretty cold about Judith’s desire to help from the instant she sets eyes on the newbies. The community intervenes, led by Gabriel, and agrees to hold a vote over their fate. It’s a sham trial. Michonne already made up her mind and knew all the right ways to push her closed gates agenda on the voters. The minute she’s tired of pretending to care, Michonne exposes Magna as an ex-con who is still in possession of a knife, therefore rendering her untrustworthy.

Magna’s betrayal doesn’t go unpunished. Her group turns on her instantly, with Connie being the voice of reason, telling them all to not make it personal. To just take the help they get and go. And to particularly not go after Michonne with yet another knife Magna somehow found. The woman must be secretly related to Magneto, I swear. It’d explain her name. As expected, Magna still strikes out on her own after dark to settle things. She’s stopped in her tracks on Michonne’s porch by a heartwarming sight. Inside, Michonne’s youngest child, a boy, runs up and hugs her like he’s missed her for weeks, but it’s probably only been minutes. A child’s love is just that big, sometimes. In this case, it’s so powerful that Magna surrenders the knife, admitting to wrongdoings in the path that haunt her. If anyone can understand, it’s Michonne. This turn in behavior spurs Michonne into action. The next morning, the group’s eviction day after the failed vote, she cuts them off and offers to take them to Hilltop to find more permanent lodging.

While Michonne keeps her cool as much as possible in public, privately she’s a complete wreck. Several times in the episode her mind swerves off-track, sending her into conversations with the dead (or presumed dead) who cannot and will never answer. How often does she “accidentally” find herself at the charred husk of the bridge speaking to her husband? Obviously often enough that Judith knows about these one-sided conversations. In one scene toward the episode’s end, we learn so, so much about the family dynamic left behind after Rick’s departure and how neither of the Grimes women have been allowed to mourn properly. Judith tries to work her problems out by helping, rekindling the philanthropic efforts of her father and brother. Michonne? Her emotions are stuck simmering in a pot on the backburner, millimeters from boiling over. It’s not healthy. She’s going to snap one day soon. 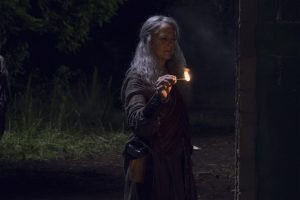 The only thing snapping in the Kingdom is the old pipes. Now a teenager, Henry does his best to patch things up, but he’s woefully uneducated when it comes to making these kinds of repairs. After a tense conversation with Ezekiel, refereed by Carol, they all agree to send Henry to Hilltop to learn from Earl the blacksmith. With Carol as escort, the pair take off. But first, a detour. In one of Carol’s rare bad decision moments, their side trek takes them too close to the now abandoned Sanctuary where some former occupants still reside. All they want is supplies. Life without a home means no growing their own food and being forced to revert to scavenging. This time they picked the wrong target. Henry wants to fight them, but Carol keeps him from getting killed and hands over whatever they ask for. Until later when she goes back alone to inform Jed and his crew that they pissed off the wrong parent. By inform I mean she lights them on fire. Sometimes Ruthless Carol still sneaks out. She’s determined to never lose another child to the apocalypse. Nor a friend. Before they reach Hilltop, Carol finishes the detour and picks up Daryl. Wonder if he brought any of that fish he caught. 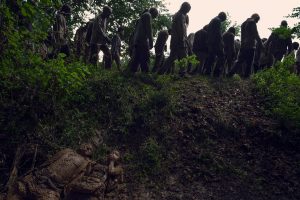 In a bid to open communication lines (and maybe find the long-lost Anne?), Gabriel goes back to work on an old radio. Problem is, the signal isn’t that great. Solution? An amplifier stationed a few miles down the road to boost the signal. Gabriel barely gets the idea out of his head before his new lover, Rosita, jumps at the chance to help. She nabs Eugene on the way out of town to provide technical aid. Probably a mistake in some ways considering he spends the entire trip trying to prove he’s a better partner choice for her than Gabriel. Even after the zombies hit the fan, he tries yet again to express his feelings for her. I’ve never been so annoyed by this man, I swear to Bob. For goodness sake, he fell ten-ish feet, has a messed up knee, and there’s walkers on their tail, but sure, let’s finally admit to a decade-long crush. The pair wind up sliding into a ditch and covering themselves in mud to hide from the walkers.

That’s when things get extra weird. The walkers . . . talk.