This is one character who will always be made the butt of the joke. Just when things get serious, she finds herself in a strip club white girl bouncing her butt at Peyton in hopes of sparking a vision. Why not, you know, go to the dead woman’s house to trigger something? Track down the ex-boyfriend and talk to him? Surely the dead woman wasn’t a walking, disrobing, stereotype. 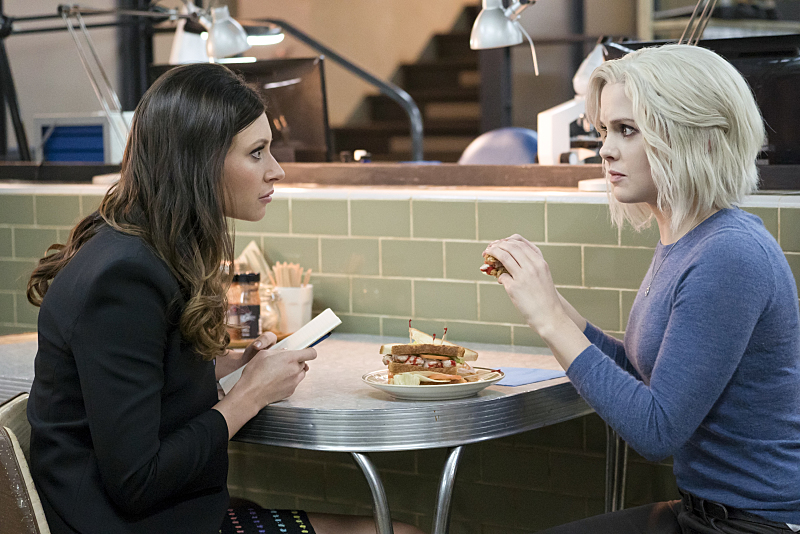 Oops, cat’s out of the bag. Yes, Peyton makes another return to the show, filling her place as Liv’s roommate. There’s a change in their relationship now that Peyton knows about zombies. I’m not sure I like it. Cassidy, the dead stripper, was ready to turn in her boyfriend Nick. He just so happens to work for Boss, and she just so happens to have accidentally found a stash house where the empire bags drugs. A lot of drugs. Peyton needs the information in her bashed-in head. Liv is the only key to unlock it. Their interactions after Liv goes dumb on stripper brains turns from friends to boss and underling. Liv didn’t even want to eat the brain. She’d picked out another, safer, brain for lunch. I get Liv pushing herself to be useful and utilizing the powers she’s gained to remain relevant, but why would Peyton use her friend like she’s one of those psychic quarter machines? Yes, she’s desperate. If Boss isn’t put away soon, he’ll send someone after Peyton. But that is no excuse to use a friend with no regard to her motivation behind constantly exposing herself to brains which make her completely looney. Solving murders is what makes Liv tick post-zombiehood. Peyton isn’t concerned with the murder at all, just the information she can pry from Liv and Cassidy’s brain. They do eventually figure out who did it thanks in part to actual police work—running credit cards and known customers through the system with a vehicle description—and help from our favorite weatherman, Johnny Frost. Liv’s big help for the murder case was a vision leading them to the sole eye witness capable of IDing the vehicle. 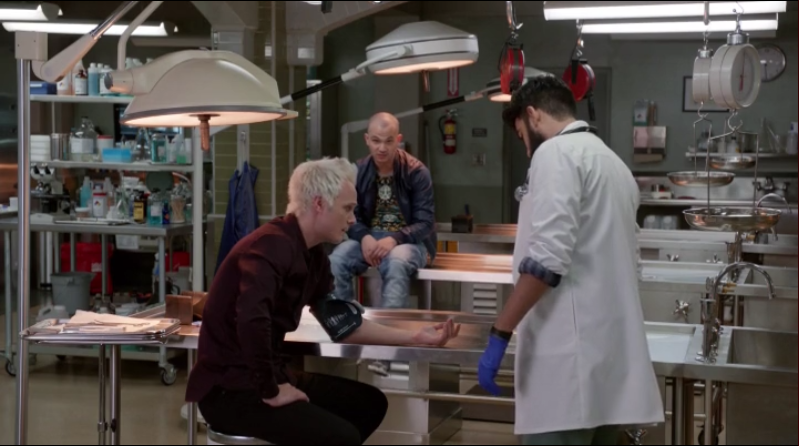 Things aren’t looking up for Blaine after taking the emergency-only cure Ravi provided. Sure, it made Blaine human again, but he can’t remember anything. Seriously. Tell him a color and two minutes later, he has no clue you even spoke. Don E. and Chief try to keep it under wraps. They pass off his odd behavior when Liv and Peyton visit to discuss his missed meetings as him being confused because he’s out of the loop or tired. Eventually when Blaine doesn’t recover himself, they take him to Ravi to run tests. There’s a glorious moment where David Anders is utterly brilliant, showing how terrified Blaine is not having a memory to solidify his identity. His goon squad will not help matters. Don E. and Chief see a gap in the drug trade—Blaine buried their business, literally, and Boss just lost a major stash house thanks to Liv’s visions. It’s a gap they want to fill. Don E. even goes so far as to turn zombie as insurance policy against assassination. Not the pair’s brightest move. They’re rats sinking a sinking ship. If Ravi can’t reverse the cure’s effects, they’ll need a way to make a living anyway. 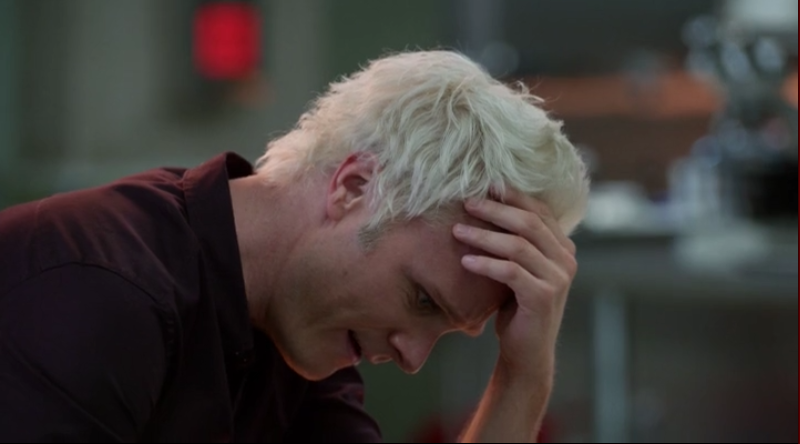 The huge news for the show is what’s going on with Ravi and Major. It all ties back to that freaking dog. The morning newspaper has a story charting the Chaos Killer’s victims. One photo is the dog and its owner, which triggers another round of, “Where did you get him? Where did he go?” Which leads to Major failing to convince Ravi that the dog they once housed and the dog in the picture are different. At some point, Major had to consider Ravi’s access to the police and his ability to charm anyone. Bothered by their morning talk, Ravi asks Bozzio about the dog. In return, she asks if he can ID the man in a surveillance picture from Blaine’s. Ravi lies, of course. He won’t say anything until he can find proof. First stop? Breaking into his roommate’s safe. It takes a while, but Ravi uncovers Major’s Chaos Killer kit. Later, he confronts Major with the evidence. Still, Major cannot tell anyone about his link to Max Rager. Pushed to the brink of panic, the adrenaline rush triggers Major’s reversion to zombie. Before he attacks, Ravi doses him with the same injector gun he uses as the Chaos Killer. I’m elated someone finally can call Major on his bull dung Long Ranger idea. Instead of alerting Liv to danger, he hid it from her. In doing so, he put everyone in danger. If Du Clark learns that Ravi has been testing zombies on his own, Ravi will either end up working in an underground bunker until he’s no longer useful or he’ll be murdered to keep the zombie information zipped tight. Either way, exposing Max Rager’s schemes to Team Zombie personnel means everyone in their little friends circle has a target on their forehead. Du Clark sent Janko to nab his own daughter. He won’t hesitate to take out the team. 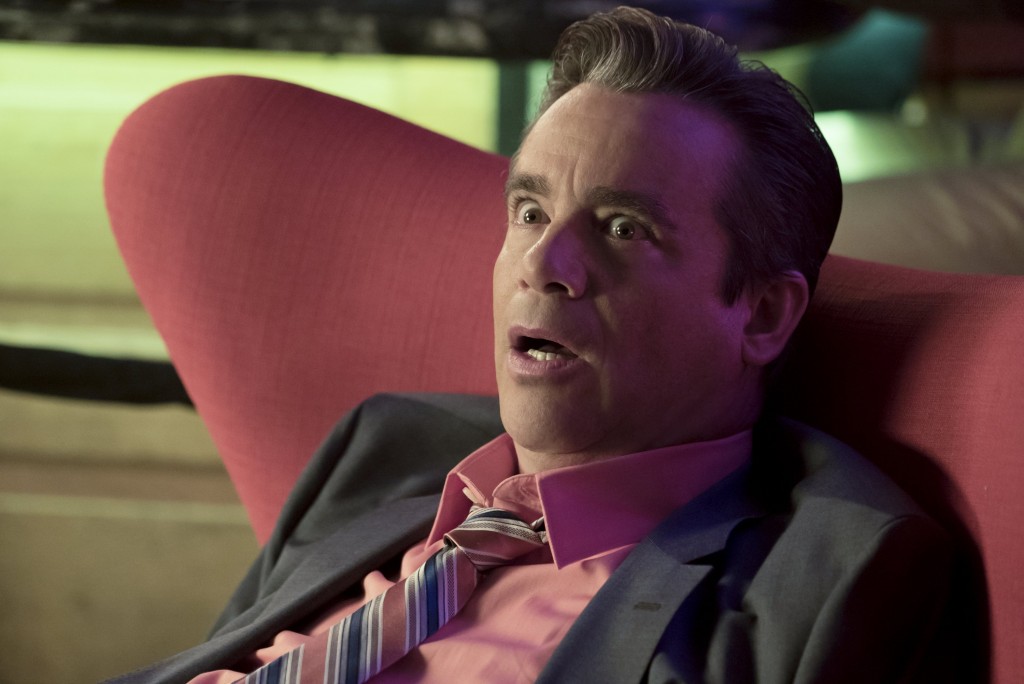 I am growing tired of our Big Bads for the season. Boss is a tiny man with anger issues and not much substance other than freaky. Du Clark’s threats have been so vague when it comes to the core characters, each time he orders a new death, it’s not surprising and lacks the impact death should have. My hope is these last episodes will wipe out both problems, introduce a few new ones, and finally let Clive in on Team Zombie’s existence.