The episode’s opener is downright beautiful, some of the best cinematography on TV this fall. But once the episode’s plot rolls on, it’s pretty clear there’s nothing grounding the action in the overall story line for the season. Forty minutes for what’s essentially a pit stop to grab supplies. 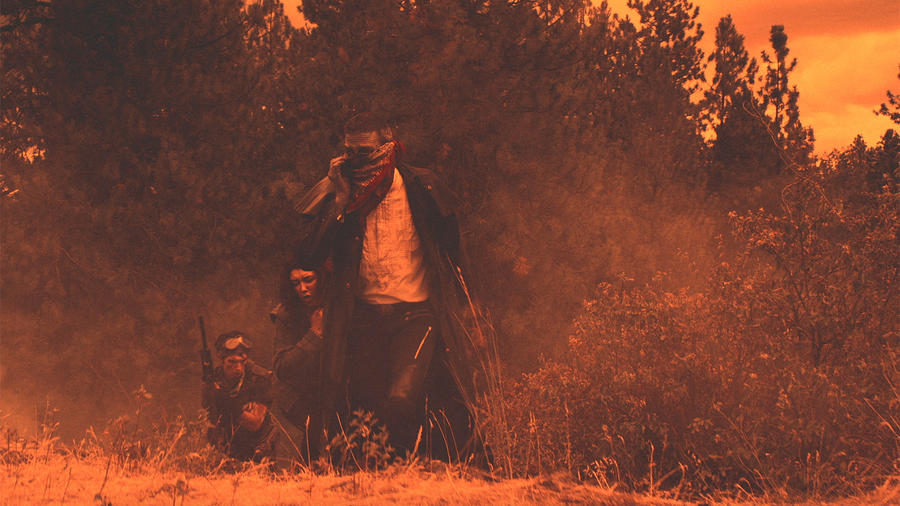 The gang is caught in a forest fire, along with enough zombies to make traveling by foot dangerous. They fight their way through the smoke to a seemingly abandoned hotel. Knowing the show’s history, it’s seriously unlikely the place is empty, but any port in a firestorm. Inside, a group of frightened business people bicker over whether or not to let the strangers inside. One man, Iggy, takes initiative to be a decent human being and unlocks the door.

That’s about the time I realized one of the businessmen is none other than Anthony Michael Hall. A shame they couldn’t do more within the episode while working with such a strong actor as guest star. Hall plays Gideon Gould, a professional hot air blower. Not really, but that may as well be his job. Instead the guy tells business people how to best B.S. each other by talking in circles. He carries a “talking stick” and an ego almost as big as Murphy’s. 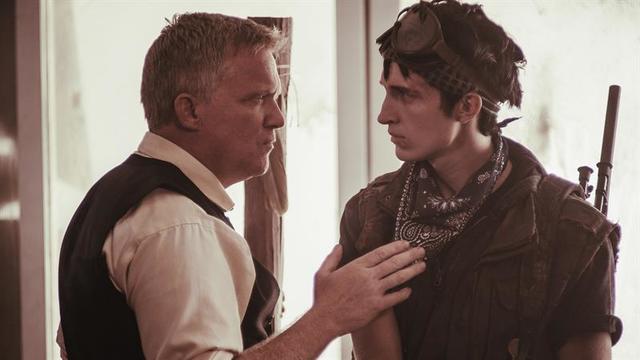 Gideon and his gal pal Dana somewhat take over, forcing Roberta and her group to participate in ridiculous trust-building exercises. He goes through the group giving his first impressions. Yes, they’re on the nose, but he ends up planting the seeds for everyone to distrust 10k later in the episode. Dana, Gideon, Addy, and Roberta sit to talk terms to sharing resources. A couple of the guys go with Iggy to check out the kitchen. Vasquez mother hens Murphy while he attempts to nap. Using his psychic zombie weirdness, Murphy distracts Vasquez to wander around the hotel. Addy leaves the meeting with Dana to salvage parts from the satellites on the roof and flirt. A gunshot brings everyone together again.

Murphy has a hole in his chest. Did he have that before? Didn’t think so. Another unlucky sap, Greg, is likewise leaking blood. Vasquez, using his Sherlock-worthy skills determines they were injured by the same bullet. It passed through Murphy and into Greg’s heart. Murphy’s blood is the only reason the guy isn’t a zombie yet. Working on that theory, Doc doses Greg with a hearty helping of Murphy’s blood. Waste not, want not. Murphy won’t miss what’s already outside of his body, right? 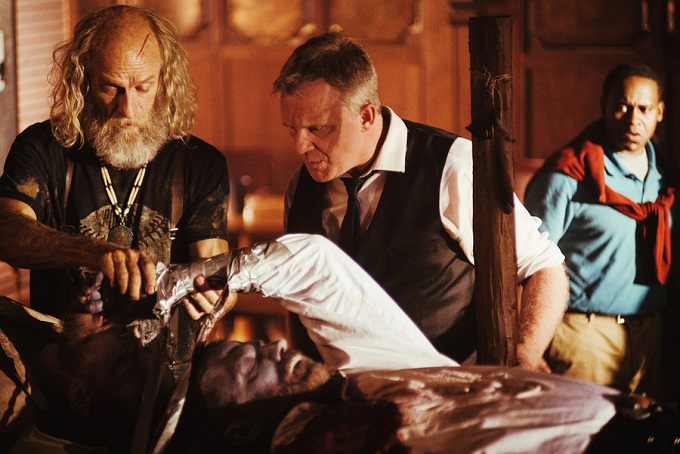 Gideon calls yet another group meeting to determine who shot the men. Automatically, they blame 10k. Addy steps up to defend him, but she’s nowhere near as convincing as the man himself. Vasquez, so not on board with Gideon’s methods, returns to the party with a duffle bag overflowing with food which the hotel survivors thought long gone, not squirreled away in a personal stash. Murphy and Greg were nearly killed for candy bars. The hotel survivors turn on Iggy, who by far the sanest, kindest person in residence. They’d assumed he took the food since he has one of two keys and Gideon is beyond reproach. Iggy is unceremoniously flung out into the smoke and encroaching zombies with only a small sledgehammer. Washington is given the pantry key and ordered to lock it down. Shortly after, Gideon finally gets around to offering Roberta food for her people. They hit the kitchen. Zombie Washington hits them. He also kills Sheila before they’re both given Mercy. The remaining food is gone.

Someone shoots at Doc. Everyone arms up and gives chase. Dana gives the shooter a free pass while Addy isn’t looking. The women wind up trapped in a closet—quit snickering—where Dana begs Addy to take her with them when they leave. Nearby zombies hear them. Roberta and Vasquez save their bacon before resuming the search for the shooter. The follow them, but come up empty-handed. While everyone scurries around for mysterious shooters and missing food, Murphy dreams about the zombies outside, subconsciously calling them to the hotel. They break out of the quarantined sections in the hotel. The fire zombies the gang fought through join the fray, eventually breaking the glass on the hotel doors. Everyone holes up in the makeshift sickbay.

Right on time, half-zombie Greg wakes. Doc asks him to identify the shooter. He points to . . . no, not Gideon, as much as we want him to suffer for being obnoxious. Travis is the shooter; Dana his lover. All they want is to get out of the hotel and away from Gideon. There’s a shootout. Greg dies again. So does Travis.

Victorious against the zombies outside, Iggy returns to the hotel. Truly apologetic, Gideon welcomes him back to the fold and offers the sacred talking stick. As thanks, Iggy whacks Gideon with the dang stick. Murphy wakes, confused and suffering the mother of all headaches.

The hotel group thanks Roberta’s crew for their part in overthrowing Gideon’s ridiculous stranglehold on their future by giving them a van and supplies. Will it be sufficient to see them through to the California lab? Do I need to ask? Of course it won’t. Murphy’s Law rules everything which happens to the crew—if it can go wrong, it will. My bet is the van will spontaneously combust when they all go on a pee break or something equally ridiculous.

At least they’re on the road again.