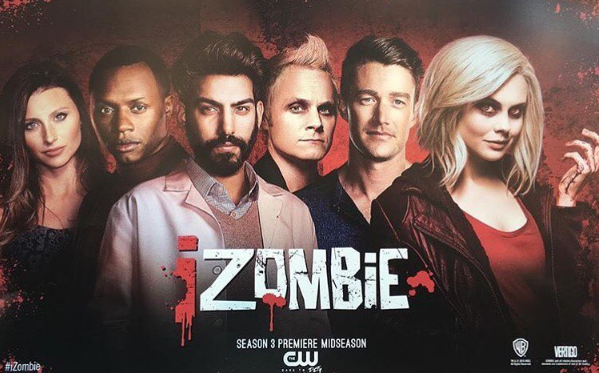 Spanking the Zombie:
Review for iZombie 305
by A. Zombie 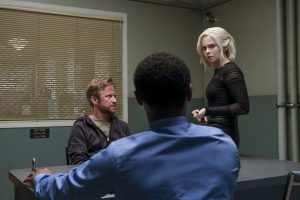 Okay, that’s off my chest. Now for the hardest part of all . . . I really enjoyed those last fifteen minutes. There hasn’t been that much genuine emotion on this show in too long. My heart sat in my throat the entire time they said their goodbyes. Where has this been for the last year? Can we order more writing of that caliber from here on out? I’d gladly shut up about the more ridiculous show aspects if we could treat the ladies’ emotions with the same compassion. 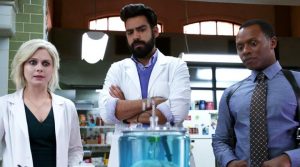 Once dosed with the serum-soaked brain, Liv is unbearably domineering. It’s embarrassing on a soul-searing level to watch such a creative actress forced to deal with this script. Liv’s visions focus solely on Roxanne’s clients. There’s no mention whatsoever about this woman’s personal life. She’s a prop to bring sex back to the forefront of this show. Roxanne’s clients happen to be the same group of weird, sexually repressed white men who typically appear when sex professionals are murdered—Frost, Stone, and Baracus. Frost and Stone band together after separately lying to the police to point a finger at Roxanne’s stalker and possibly the one blackmailing Frost with footage from his sessions under Sweet Lady Pain. Team Zombie sets up a money drop to catch their guy. Clive’s bumrush with the food cart is probably my favorite stunt on the show so far. I don’t know why. It just is.

At the police station, Liv does a crap job of intimidating the blackmailer. He folds under such weak pressure, confessing with a lot of wishy-washy language. Huh? That’s anticlimactic. There’s no righteous justice served. Roxanne’s murder is wrapped as quickly as possible to make way for Major’s big scene. 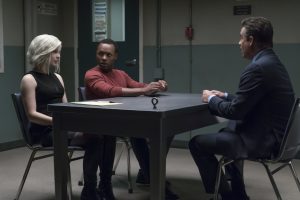 Zombie society is slowly banding together to face the threat posed by Harley Johns and his fellow Travelers—that’s the name I thought he said, but I could’ve had a bug in my ear. Johns has enough proof to pose a serious threat to Fillmore-Graves’ plans for Seattle. He also has a whole load of batcrap crazy ideas on how to go about protecting humanity. Stoll isn’t idly collecting information from a known threat during the meeting—held at Liv’s suggestion—but takes the chance to bug Johns’ truck so they’re on the same page as the hunters. This sub-story touches on a boatload of human rights issues and is focused on introducing a whole new people into an already tumultuous global community. Seattle isn’t an isolated incident. The city is merely testing grounds for the weapons used during the inevitable conflict. Fillmore-Graves adapted at break-neck speed to their new reality in somewhat overwhelming ways—the chest o’ heads Major found after his stabbing, for instance. There’s no doubt the zombies will find a way to survive and thrive, that is clear now. The humans won’t accept their new neighbors easily. The stage is set for some serious fighting right in Team Zombie’s back yard.

The team is down a man. With war on the horizon, can they find a way to bring the undead and the living together while rebooting Major? Let’s not forget, if Don E continues down his current road, he’ll create an entire generation of zombies all on his own long before Fillmore-Graves or Team Zombie figure it out. A “baby” boom in the middle of tense introductory talks tends to feel more like an invading army, especially since there’s little to no gestation time for the transformation process and zombies emerge as fully functional adults so long as they maintain healthy eating habits. Seattle is a powder keg and both parties keep lighting matches to fling at it.

Halfway through the season and we’re looking at war. That’s some speedy pacing. Next week may slow things a bit. Liv won’t have enough focus after the next brain to tie a shoe, let alone prevent a war.