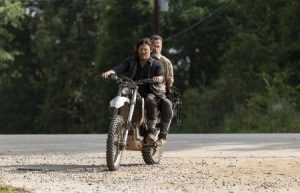 With the TWD premiere fast approaching, the cast and production team is in full promotional mode. The icing on the cake before this year’s season 9 premiere on Sunday, October 7th on AMC has to be TWD’s place amongst the handful of shows chosen to feature in this year’s two week celebration of the television format at PaleyFest NY.

On October 6th at 3 PM, The Walking Dead will hit the festival stage with stars Norman Reedus, Melissa McBride, Jeffrey Dean Morgan, and showrunner Angela Kang. Other guests may still be added to the lineup for the panel portion of the festivities. The panel will be moderated by EW‘s Dalton Ross. Fans in attendance will also be treated to an early premiere of the first episode from season 9.

As of this moment, the main theater for this TWD event is sold out. Don’t despair if you’re still planning to attend. PaleyFest does offer a significantly cheaper ticket to watch panels in an overflow theater with a video feed of the event.

Named for William S. Paley, founder of CBS and The Paley Center for Media, PaleyFest is a must-see pop cultural event produced by the Paley Center that brings fans together with the stars and creators of their favorite shows for panel discussions with audience Q&A. PaleyFest takes place both in LA & NY. The next PaleyFest LA takes place spring 2019.

PaleyFest NY 2018 runs from October 5th through the 18th.