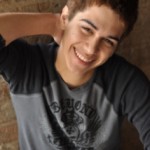 Anthony Guajardo went from appearing on the big screen while hanging out with Sharkboy and Lava Girl on Planet Drool to battling rednecks and zombies with the Vatos on AMC’s “The Walking Dead.” As Miguel, Anthony secured his place as a Zombie Survival Crew commander when he took on co-captain — resident redneck Norman “Daryl Dixon” Reedus — and lived to tell the tale. He’s gone on to appear in films The Symphony of Silence and Arose a Coward.

Anthony travels from his new home base in Los Angeles, CA to various conventions, schools . . . wherever he can reach those who need assistance in preparing for the Zombiepocalypse. When he isn’t auditioning or working on new and exciting film projects, of course.

Where to find Anthony around the web: (Click on the pictures)